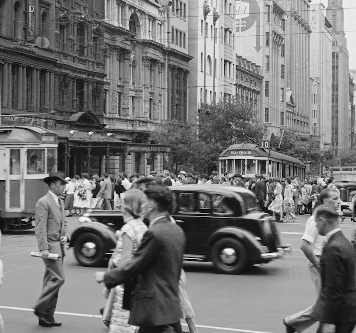 We know this because at the end of his book, author Jay Carmichael – a gay man himself – cites the work of Denis Altman and myself (in my role as a gay historian), among others. The novel is illustrated with photographs from collections in the State Library of Victoria and the Australian Queer Archives.

Marlo concerns central character Christopher’s sexual coming-of-age, after moving to Melbourne as a young adult from the small country town of Marlo in East Gippsland. The novel explores how same-sex-attracted men lived their lives during the repressive period following the end of the second world war.

Christopher moves to 1950s Melbourne, where he finds a job as a mechanic and shares a house with a friend from Marlo, Kings, and his girlfriend. During a picnic in the Botanic Gardens, Christopher bumps into another suit-wearing young man, Morgan, who later in the novel we discover is an Aboriginal Australian, living in white society with a Certificate of Exemption from the Board for the Protection of Aborigines (New South Wales).

Christopher and Morgan struggle with what appears to be Christopher’s self-loathing and yearning for acceptance.

PrevPreviousORTIA must stop working hard to make things unpleasant for tourists
NextTourists Are Back in Numbers: Minister Lindiwe SisuluNext