Mature love can, and does, happen 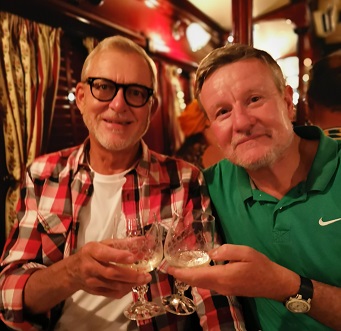 Losing a partner late in life, and yet still finding another partner.

Barry Greyvenstein was 73 when he lost his partner of thirty years to Covid in July 2021. Within weeks he realised that he couldn’t live on his own, and started on a search for someone of like mind.

Dave Robbins was 59 when lost his partner of twelve years in June 2019; much like Barry he soon realised that he did not like living on his own (in fact he says he “detests” it), and set out on the effort of seeking a new partner.

Fast forward to August 2021 and, on a well-known gay site, they made contact. Texting messages to each other soon progressed to phone-calls and finally a visit in September (they lived 290 kilometres apart). Barry was extremely nervous (he hadn’t dated for thirty years!) when Dave drove up the driveway – he approached the vehicle with his hand outstretched for a handshake. Dave, to his and Barry’s eternal thankfulness, threw caution to the winds, said “bugger that”, and enveloped Barry in a hug. On such small things can relationships blossom.

By May the following year, they had moved in together, at the same time selling Dave’s property in his former hometown. And the partnership, and the two “teammates”, goes from strength to strength.

So how does one go about becoming involved again late in one’s life? These are some mindsets that Barry and Dave found were useful:

Both Barry and Dave realise they are fortunate to have met each other, and don’t want anyone to think that they are waving the fact of their relationship in other people’s faces and saying “look how good we are”. Rather, it is their intention to motivate the older gay community, who may currently be on their own, to not give up hope and begin to believe that there is someone out there for them. And then they, too, can become a team.