Jeep’s interesting gay history in the US 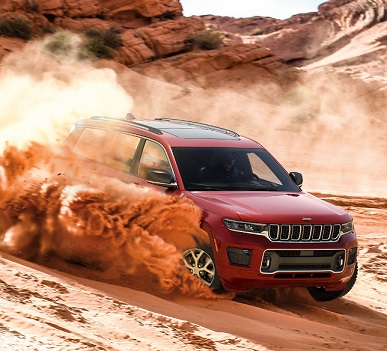 Gay buyers love the macho appeal and the heroic aura of these simple, almost unbreakable cars.

Experiencing the launch of the new Grand Cherokee reminded me how we worked closely with Guy Franken for about ten years on establish this brand in South Africa’s gay community as well. Very clever advertising sent a clear message to our target audience and Wrangler, in particular, was adopted by many new owners I knew personally. Gabriel Janse van Rensburg who established the Gay Pages with me in 1994, emigrated to Canada with his partner Gerrit a few years later and they bought a Grand Cherokee soon after they got there.

On my first visit there we had an incredible road trip with the Jeep across Canada, and I fell in love with the country, and this go-anywhere vehicle that never lost its footing even in snowy places like Jasper National Park. However as great as the older models were in terms of comfort the new Grand Cherokee takes comfort to a whole new level. Willys-overland delivered the prototype “Quad” to the US Army on Armistice Day (Veteran’s Day) 11 November 1940. Two Willy’s Quads were made by three manufacturers namely, Bantam, Willy’s, and Ford who won the tender in June 1940 amongst 135 automakers. In a remarkable 75 days these two light reconnaissance prototypes were presented and eight months later the first mass produced military Willy’s MA Jeeps (GPs), in 1941, rolled out to various Allied forces across the world as buy or Lend-Lease Jeeps. They only weighed about 1250kg, about the same as the globally best-selling roadster, the BMW Z3, made famous in a James Bond movie. Ironically a German car built in the USA like JEEP. From 1942 to 1945 the Willys MB in its well-known US army green features as a standard prop in most Second World features. These tough and agile General Purpose known as GPs or JEEPS could cover large distance over challenging terrain at remarkable speed. It was unfailingly, faithful as a dog, strong as a mule and agile as a goat, while able to carry double what it was designed for.

After the war thousands of returning soldiers had established a close bond with their Jeeps and many bought the commercially distributed Civilian Jeep CJ- 2As built from 1945 to 1949. One MB was even awarded a Purple Heart and sent home. A famous quote by General George C. Marshall, U.S. Army Chief of Staff during World War II, and later US Secretary of State described this 4×4 Jeep as “America’s greatest contribution to modern warfare”.

Gay buyers loved the macho appeal and the heroic aura of these simple, almost unbreakable cars and became early adopters as well. In gay areas of big cities, it was clearly seen all over the place. A common joke with Muscle Mary gay jocks who have just bought a jeep is, “now, you have some macho appeal! “

These areas developed a distinctly gay character from the ‘50s and San Francisco along with New York became the leaders of the gay rights movement in the sixties. Jeeps and Harleys appeared in protest marches and pride parades over the years, especially in the US, where the brand is more aligned with our rainbow community than anywhere else. Stellantis, the mother company of Jeep got involved with several Pride events including in NYC Pride 2022 where a rainbow-wrapped Jeep Gladiator pulled the Playbill float through Manhattan. Jim Morrison, vice president of Jeep North America, said that Motor City Pride (Detroit) is an important way for Stellantis and the Jeep brand to celebrate the company’s diverse and inclusive work culture to show its commitment to diverse customers and communities.

The latest Jeep Grand Cherokee raises the bar as the most awarded SUV ever with a high level of standard features. Jeep celebrates 81 years of 4×4 leadership with the rebirth of an American SUV close to millions of people’s hearts. Offering unmatched off-road capability and incredibly stable ride comfort, it now also includes a third row of seating. Premium styling and craftsmanship inside and out, along with a host of advanced safety and technology features makes it highly competitive in its segment.

Three 4×4 systems – Quadra-Trac I, Quadra-Trac II and Quadra-Drive II with rear electronic limited slip-differential (eLSD) are equipped with an active transfer case to improve traction by moving torque to work with the wheel with the most grip. The class-leading Selec-Terrain traction management system allows you to choose the on- and off-road setting for optimum 4×4 performance with five available terrain modes (Auto, Sport, Rock, Snow, Mud/Sand) to provide optimised calibrations.

An all-aluminium 3,6-litre Pentastar V6 engine produces 210kW and 344Nm of torque. The 60-degree angle between the cylinder make it inherently smooth running.

LED lighting is standard on all Jeep Grand Cherokee trim levels, which allowed for design flexibility and helped to shape the identity of the vehicle. Ultra slim headlamps with unique signature lighting makes instantly recognisable during the day and at night.

An exquisite interior features handcrafted materials and has led the Grand Cherokee L to be named one of Wards 10 Best Interiors for 2021. Obviously, you will find just about anything your heart desire from cutting edge technology and safety features to sound worthy of a cathedral.

A fully digital rear-view mirror displays video in real time from a rear-facing camera, offering an image that is unobstructed by the D-pillars or rear seats. It also reverts back to a traditional reflective mirror.

Windshield full-colour Head-up Display (HUD) is configurable up to 10 inches and features three predefined configurations and a custom mode with a choice of four reconfigurable layouts which can be personalized and saved within the driver profiles.