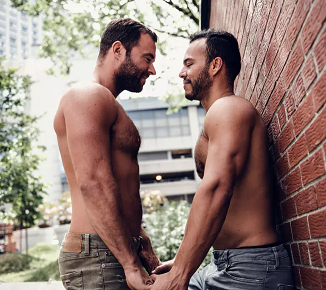 On the internet, there’s a long-running bit about shows that “sound like 30 Rock jokes.” You know the ones: They’re the peculiar, high-concept reality series with hooks so ridiculous, they had to be dreamed up by a team of brilliant comedy writers.

Well, in that spirit, a new gay dating show is just around the corner—a real one—that’s called For The Love Of DILFs. And we can’t believe 30 Rock didn’t come up with it first!

From Daddy TV (the minds behind adult film reality series, X-Rated: NYC) comes this new OUTtv original that follows a group of single gay men as they compete to find love and win a “$10,000 investment into their relationship.” We have no idea what that last part means, but we assume a significant portion of that budget goes to sex toys?

While attempts at gay dating shows have come and gone—to varying degrees of success—For The Love Of DILFs comes loaded with two unique hooks that hope to set it apart from the pack and make this series especially 30 Rock-ian.

The first is that our brave contestants will be sorted into one of two groups: “Daddies” and “Himbos.” Though we don’t yet know how the categorization will impact gameplay, we have to imagine the objective will be to link up one to-die-for daddy with one hunky himbo and let the sparks fly. The show is said to have plenty of laughs, but will also explore the singles’ “genuine emotions and romantic connections —from first kisses to blistering breakups.”

Now, you might be asking yourself: Can’t a daddy be a himbo? We’re no scientists, but are pretty certain that that is possible. Still, the show maintains that these two types are diametrically opposed and, therefore, trying to pair them up should make for some must-see TV.

In a press statement shared with Queerty, Daddy TV co-founder Topher Cusumano said the following: “For years the internet has been obsessed with these two specific gay subcultures, which on the surface seem like total opposites. But if reality TV teaches us anything, it’s that sometimes opposites attract.” Fair enough!

But the other ace up For The Love Of DILFs‘ sleeve is its host: An unlikely celebrity whose role as an emcee for a gay dating show is so random that it actually swings all the way back around into making sense. It’s none other than Stormy Daniels!

That’s right, the adult film star/former mistress of disgraced ex-president Donald J. Trump is our hostess with the mostest. It’s said she’ll live alongside these Daddies and Himboes in DILF Mansion, acting as their master of ceremonies and providing relationship advice throughout their journey.

You’ve got to love the synchronicity of Daniels’ announcement coming the same week as Trump’s sputtering start to his 2024 presidential campaign. Honestly, 30 Rock couldn’t have written it better!

And, by the way, Daniels identifies as bisexual, so she’s part of the family. Here’s what OUTtv COO Philip Webb has to say about the decision to welcome the star to For The Love Of DILFs: “We’re thrilled to be working with Stormy. She has a long public history of standing up for the LGBTQ+ community. That allyship, starpower, and relationship expertise makes her the perfect fit to helm a show about guys hunting for love.”

All we’ve got to go off of right now is the above image of Daniels looking stunning in a purple gown, but we’ll be eager to see more and meet the contestants when For The Love Of DILFs premieres on OUTtv in early 2023. Stay tuned for more!