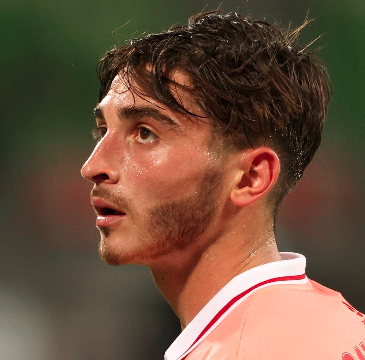 Josh Cavallo, the only openly gay top-flight male soccer player in the sport, has told CNN that FIFA’s decision to ban players from wearing “OneLove” armbands at the Qatar 2022 has made him feel “excluded.”

The captains of several European teams decided not to wear “OneLove” armbands at the World Cup due to the danger of receiving yellow cards.

England, the Netherlands, Belgium, Denmark, Germany, Switzerland and Wales were set to participate in the “OneLove” campaign to promote inclusion and oppose discrimination.

But those countries’ associations said in a statement on Monday that the armband – which features a striped heart in different colors to represent all heritages, backgrounds, genders and sexual identities – would not be worn in Qatar.

“I’m disappointed in FIFA. They have made me feel excluded,” Cavallo told CNN’s Chief International Anchor Christiane Amanpour on Tuesday.

“You know, representation is so important and there’s so many people watching these games, you know, that it just shows that FIFA’s intentions are not to make … football a place for everyone, you know.

“We have families watching, we have the next generation watching. FIFA needs to do better. It’s the world game.”

The Adelaide United midfielder and former Australian youth international made headlines last year when he came out as gay.

Cavallo has subsequently become one of the most recognizable faces in the sport and was recently named “Man of the Year” at an awards ceremony hosted by Attitude Magazine, Europe’s largest LGBTQ magazine publication.

Cavallo was speaking to Amanpour ahead of Australia’s 4-1 Group D defeat by France in their opening World Cup game.
Earlier this year, Cavallo spoke of his hopes of playing for Australia at the World Cup, but he didn’t make the Socceroos’ final squad for Qatar 2022.

However, the 23-year-old said that he had expected the Australian captain to wear the “OneLove” armband in solidarity with the LGBTQ community despite the risk of sanctions for any player who wore the armband.

“If I had been there and I had been the captain, yes, I would have worn the armband. I’m not ashamed to be who I am,” Cavallo told CNN.

“And it’s exactly the reason why I’ve come out and to be the person I am today,” added Cavallo. “I do expect my captain to wear it.”