Lockdown Level 3, Version 3: Policymaking on the hoof amid war talk 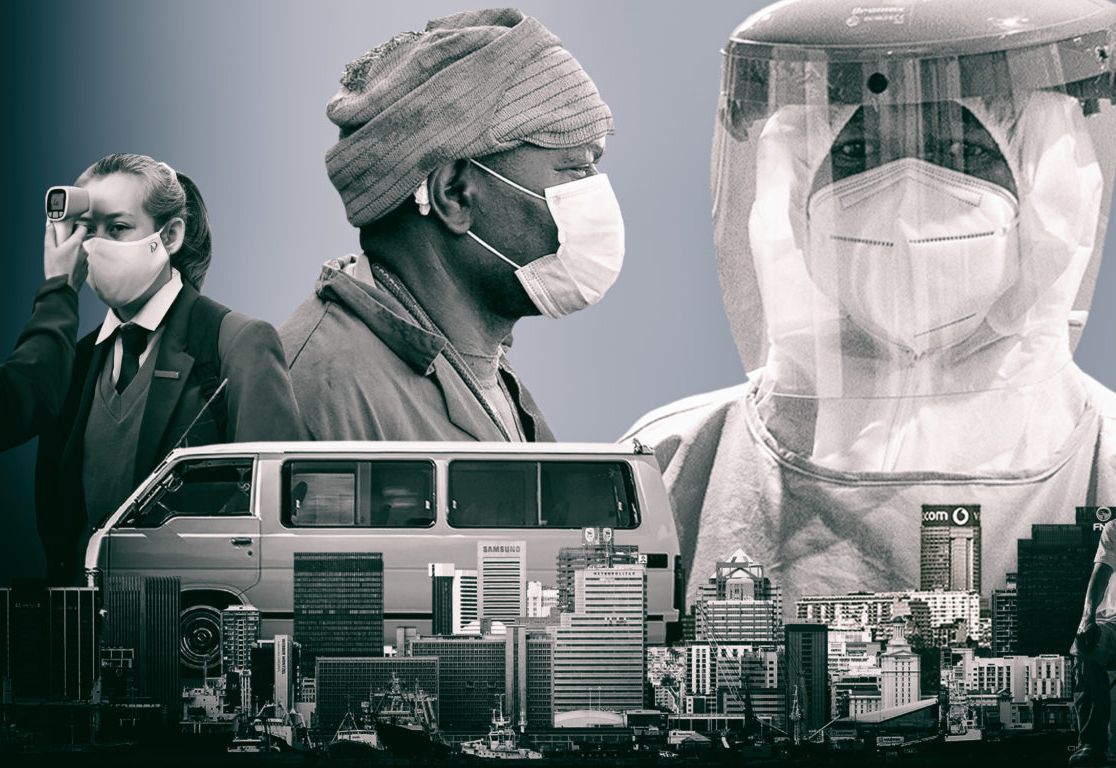 Hotspots are no longer a thing as lockdown Level 3 has mutated into its third version – without even a nod to public input. And that means the government’s much-touted Risk-Adjusted Strategy to lead South Africa through its Covid-19 public health crisis isn’t worth the paper it’s printed on.

On 12 July, with one fell swoop of the ministerial pen, the much-vaunted Covid-19 hotspot approach fell by the wayside.

“The declaration of a geographical area or cluster of geographical areas as hotspots for Covid-19 as determined in the Regulations published in Government Notice No. R. 608 of 28 May 2020, is hereby deleted,” said the latest lockdown regulations signed by Co-operative Governance Minister Nkosazana Dlamini Zuma, who is responsible for the declared State of Disaster, now extended to 15 August, that gives rise to the lockdown levels.

It’s not quite clear if only the 12 declared areas – all metros except for Mangaung and five district municipalities – are now undeclared, or if the entire Covid-19 hotspot approach has been done away with. The regulations are badly drafted.

The hotspot policy had been touted since May 2020 as a proactive, responsive means of ensuring that additional resources, including health workers and experts, could be sent to specific areas to help contain the pandemic.

The criteria for hotspot status was five infections per 100,000 population, to be reviewed every two weeks, Health Minister Zweli Mkhize said in answers in the National Assembly and during a briefing to the National Council of Provinces alongside Dlamini Zuma on 27 May.

While Mkhize this week publicly argued that all of South Africa was now a hotspot, such claims are without foundation. The latest set of State of Disaster regulations declare no Covid-19 hotspots as is required for such status.

To put it differently: if all of South Africa is now a hotspot, legally and policy-wise the 12 July lockdown regulations should have declared all 52 districts as such hotspots. But the regulations did not do so.

Merely talking about something does not make it so. Instead, hard questions must be asked about the government’s seeming liking for law-making by regulation and ministerial directive.

As with the Covid-19 hotspot policy, the government’s Risk-Adjusted Strategy that determines lockdown levels also appears to be changed at will.

Crucially, this Risk-Adjusted Strategy had been the government’s sole attempt at obtaining public input beyond the usual chats with elite lobbies, or what’s dubbed “stakeholders”. The document was circulated from 25 April with a four-day public input period. Coincidentally, such consultation is in line with what the Disaster Management Act outlines.

Lockdown Level 4 from 1 May had some resemblance to Risk-Adjusted Strategy proposals. Controversially, the tobacco ban that was to be lifted stayed put despite a presidential announcement, and a curfew was put in place from 8pm to 5am.

Lockdown Level 3 from 1 June is now in its third iteration – the initial regulations published on 28 May, the 25 June advanced version and the 12 July clampdown reintroducing the booze ban and a curfew – none of which bear resemblance to what’s listed under Level 3 on the government’s official Covid-19 website.

Who makes these decisions, when and how? And while this is not necessarily immediately transparent, the underlying philosophy is: restrict, permit and control with lists of what is allowed.

That must raise serious questions over policy-making and implementation. It seems the government’s reluctance to move to Level 2, or to restart public consultations led to a fiddling of the lockdown Level 3 takes.

At least some of that relates to tensions between the constitutionalists and the securocrats. But some of it also ties to elite lobbies.

Out of favour is the liquor industry, whose representatives are on public record as saying that they had not been consulted.

The government’s argument for reintroducing the booze ban is that with the permitted limited alcohol sales on lockdown Level 3, trauma and violence had increased to take up crucially needed resources in the fight against Covid-19. But the information on which this is based has not been made public.

In favour is the taxi industry, which was consulted. The taxi industry got its demand for 100% load capacity, at least for trips of up to 200km. That would include, for example, from Durban to the Wild Coast Sun in Eastern Cape (168km), Pretoria to Vereeniging (121km) or Pretoria to Rustenburg in North West (129km) and Cape Town to Hermanus (121km).

In a televised briefing on Thursday 16 July, Transport Minister Fikile Mbalula tried to put a spin on this, listing conditions for the full-capacity loading, including masks for everyone, sanitising and that windows in taxis would have to be open by 5cm, with blockers installed to prevent closing.

All this is far from the government’s Risk-Adjusted Strategy to manage the Covid-19 lockdown levels.

And even where regulations are in line with this strategy, the oddest exceptions creep in on crucial public health issues, such as the mandatory wearing of masks in public.

No masks are required for “vigorous exercise” in public open spaces – ministerial directions will define what’s “vigorous” – as long as that person stays at least 3m from any other person. That’s Regulation 5, sub-regulation 2, as amended by 2(A) on page 4.

It’s this on-the-hoof policymaking that allows Basic Education Minister Angie Motshekga to issue directives on the further reopening of schools, and then just ahead of that reopening to can the whole move.

It’s exactly that sort of policy on the hoof that allows skop, skiet and donner Police Minister Bheki Cele his own interpretations.

Who makes these decisions, when and how? And while this is not necessarily immediately transparent, the underlying philosophy is: restrict, permit and control with lists of what is allowed.

A public health crisis approach to governance would run differently, with any limitations expressly listed in an approach that puts people at the centre, and ensuring people’s empowerment with information and resources, alongside participatory policy on public health responses.

Instead, for the past four months the lines of governance have been blurred. Although constitutionally, it is only Cabinet that can make executive decisions, the National Coronavirus Command Council has been put front and centre of Covid-19 measures, backed up by the NatJoints, the National Joint Operational and Intelligence Structure that brings together police, soldiers and spooks in a structure not established in law or regulation – and which does not account publicly.

And while the NCCC, following challenges, has been styled as a Cabinet committee, ministers still talk of taking their issues and proposals to the NCCC.

In this context, Parliament has a crucial role to play. Constitutionally, Parliament must hold the executive to account and conduct oversight. No exceptions for States of Disaster.

Why is any of this important? Because talking war with its focus on restrictions and kragdadigheid instead of a people-centred resolution of a public health crisis is an attitude.

Its committees, empowered to call anyone to appear before MPs and be provided with any document, could have questioned any minister on their directives, from taxi load capacity to the sale of closed-toe footwear only, or T-shirts as undergarments.

When Dlamini Zuma or Mkhize appeared in Parliament, their interactions with MPs were far from robust engagements, even from opposition politicians. And certainly no committee took a report to the House to challenge a regulation, as would be the lawmakers’ right.

And so, the Cabinet pushes on as ministers have taken to rule by ministerial decree, direction and regulation. With Level 1 understood to be on the cards only towards the end of the year, South Africa’s lockdown, already on Day 113, may well set records. At lockdown Level 1 the Risk-Adjusted Strategy still talks of face masks, physical distancing and partially closed borders even if there are no limits on gatherings. The lockdown will end only when Level 1 ends.

Meanwhile, the martial narratives of command councils and the coronavirus “enemy” were upped in Wednesday’s televised virtual presidential imbizo.

The president wasn’t the only one talking war. There was Dlamini Zuma, who explained the booze ban by relating how soldiers do not drink in war in her isiZulu comments during Monday’s lockdown regulation briefing.

War talk is easy to the governing ANC that 26 years into constitutional democracy continues to self-describe itself as a “liberation movement”. Uniting the ANC around a common enemy – coronavirus is usually referred to as the “unseen enemy” – is a single-issue focus that helps the governing party set aside factions and disagreements.

But, as South Africa’s commander-in-chief, Ramaphosa knows that no war has been declared, and neither the territorial integrity nor the sovereignty of South Africa is threatened.

Why is any of this important? Because talking war with its focus on restrictions and kragdadigheid instead of a people-centred resolution of a public health crisis is an attitude.

That attitude has an impact on governance – and ultimately the kind of democracy South Africa will have.