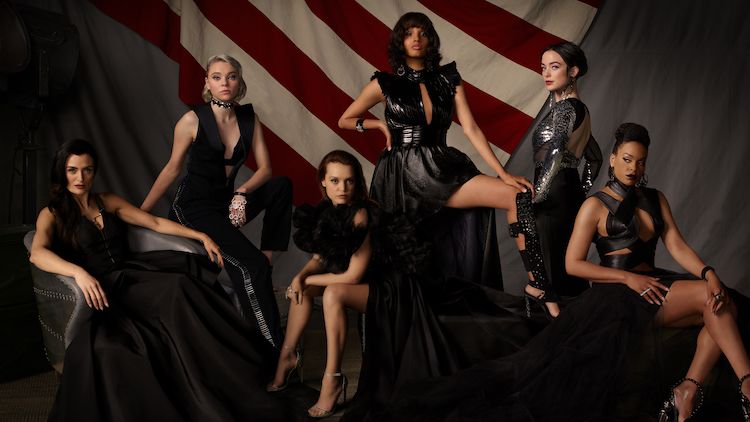 A few months after its first season finale, the creator and cast of Freeform’s queer, feminist supernatural series Motherland: Fort Salem dropped some clues about what to look out for in season 2 at a virtual panel hosted by San Diego Comic-Con.

Showrunner Eliot Laurence appeared with the series’s Bellweather trio Ashley Nicole Williams (Abigail Bellweather), Jessica Sutton (Tally Craven), and Taylor Hickson (Raelle Collar) for an in-depth discussion of all things Fort Salem. Also on the panel were Amalia Holm (Scylla Ramshorn), Demetria McKinney (Anacostia Quartermaine), and Lyne Renée (General Sarah Alder) for a chat about the future of their characters and the impact of their show, which included an in-depth discussion centering LGBTQ+ visibility via Hickson’s and Holms’s characters.

In the world of Motherland: Fort Salem, history has been rewritten. Witches have vowed to use their abilities to defend their countries to escape the burning times and shifted the narrative to create a society that places women in positions of great power. Set in the modern day, the series follows three young women as they navigate basic training under centuries-old General Alder.

Motherland proudly upends many conventions; in addition to creating a more female-centered society, the series features a diverse cast of regular characters, which includes an LGBTQ+ main pairing and women of color in leading roles.

“When you see LGBT representation in film it’s so rare, especially in protagonists,” Hickson said at the panel. She credits the role and the writers with exposing her to the lack of LGBTQ+ representation in media.

“I had the impression that [representation and] diversity in Hollywood was massively expanding. That mind-set was part of the problem,” she said.

Hickson also acknowledged the rarity of a queer relationship as the central focus for a show.

“When these communities finally do get a nod, it’s not to the extent of screen time that you see ‘Raylla’ have. They’re quickly killed off, or they’re token characters,” she said of familiar tropes for queer women.

Taking inspiration from witchcraft, in its first episodes, Motherland quickly establishes that female lust and sexuality are not as stigmatized in its universe — at least, not at Fort Salem.

“Raelle and Scylla need to fight for their love in a different way,” Holm said. “Love is not the norm or the goal, so if that’s what you want, it’s going to be abnormal.” That point rings especially true as their complicated individual storylines become more intricately intertwined.

Laurence also touched upon the apparent absence of racism and homophobia in the Motherland universe, citing it as a conscious decision, though he reminded viewers that Fort Salem and the events of season 1 occupy a small part of their reimagined world.

“Because female power in the American military and in militaries around the world has been so visible and present, I think the tide has shifted towards feminism in the world at large, but it’s still not a perfect place,” Laurence said.

Plans for the series include exploring sentiments outside of Fort Salem’s matriarchal society, which were quietly introduced at the beginning of the first season.

“Outside in the world at large it’s a little closer to the world we know,” Laurence explained, agreeing with Sutton, who reminded him of the many alternate takes filmed for one of those establishing scenes. Bigotry and racism still exist, perhaps under different names.

“In season 2, we’re going to see witch hatred and what that looks like,” Laurence said.

He also teased that the next season will have the army and Spree considering if their war is worth fighting when a new danger threatens them all.

“These very different organizations are starting to realize ‘Wait a minute, we might have the same enemy. We might want to help each other,” he said.

At the panel’s conclusion, McKinney, who plays Anacostia, the amicable staff sergeant of the Bellweather unit and General Alder’s right hand, expressed her gratitude to the show and its dedication to keep pushing the boundaries of representation and storytelling.

“For this whole mind-craft to be constructed from someone who may not have ever had those experiences, it lets us know that the changes are possible,” McKinney said of their showrunner.

Motherland: Fort Salem will return with new episodes in 2021. Watch the Comic-Con panel below.