This first-time screen actor still continues receiving rave reviews and turned out far friendlier and more relaxed than the character
Nicholas van der Swart that he acted so well.

I drove from Camps Bay on yet another postcard pretty day to the Fugard theatre to do a Gay Pages cover shoot with Kai Luke Brümmer and photographer Reinhard Janse van Rensburg. We were ecstatic to have the dashing Kai, lead actor from the film, Moffie on the Gay Pages Autumn cover. He portrays the introverted Nicholas van der Swart, a character based on the writer, André Carl van der Merwe exceptionally well. Being a huge fan of André, as well as the movie, made me curious to see how the real-life Kai would match up as my imagined character Nicholas from print versus the film. Like just about every gay man who have read the book, I also fell a little in love with the irresistible character of Nicholas.

Kai disarmed me with a bright cheery smile when we were finally introduced face to face after numerous emails and a few conversations. We chatted jovially and he clearly was far less reserved than Nicholas, a role for which he received many well deserved, rave reviews around the world. Unbelievably, it was his first movie role. Kai as a seasoned stage actor, took to the stage at the age of two in his first role as a baby giraffe! The thought that he was probably even cuter then brought a grin to my face. I should have asked his mom…

Our conversation about the boot camp that the actors had to experience in order to get a sense of the army, triggered many vivid memories of my own homophobic army experience. After an idyllic summer post-graduation holiday with my farm boy, Dolf, I was badly prepared for the shock of having three days before reporting for my army call up. I desperately tried to get out, but military bureaucrats had no interest in yet another army dodger. Ignoring them, meant a jail sentence, if I was arrested at passport control. On my way to the army camp in my battered surfer panel van, I was caught speeding close to the gate…

After this momentary flashback, Kai brought me back to earth when he told me he felt completely ecstatic after an extensive year’s auditioning for various roles and finally receiving the call telling him that he’d been cast as the lead in Moffie, while doing a voice over. Kai didn’t really have the time to think about it while going straight to the theatre, to perform in The Curious Incident of the Dog in the Night-Time. Kai managed a quick phone call to his mom, struggling to control his emotions as he still had to perform that evening.

Oliver Hermanus and Jack Sidey really fleshed out all the roles in the film, and Kai would have been happy to play any of them, but instinctively felt that Nicholas was his role.

It was never a concern to play an introverted gay character as Kai believes sexuality is fluid and does not place himself in any specific box. Actors are asked to imagine themselves into all types of roles, and he shudders to think that something like sexuality might prevent an actor from taking on the challenge of connecting to a human who they see as somehow different to themselves. Additionally, even though Nicholas’s sexuality was instructive to the events of the story, it wasn’t the only factor to consider in realising his character, so Kai had multiple points of access into Nicholas’s headspace.

Having read the homoerotic and violent novel, which is adapted quite substantially, Kai focussed mainly on the film script. Violence forms part of our everyday lives in South Africa, and probably deeply informs all the decisions that we make. So, it is in Moffie where even though Nicholas may have feelings for someone, he is never able to truly act on them for fear of persecution. Kai thinks the violence in the film also highlights how toxic masculinity not only defines Nicholas’s specific world, but similar dynamics in ours too. Hopefully the film asks people to question this relationship in similar ways to the novel that inspired it.

Kai could identify with the reality of what gay life was in the army even though the world represented in the film seemed so foreign, yet it is the world that raised him. His father went to the army, and only when he got the film, his dad started opening up to Kai about his experience. They researched extensively into the time period, which helped to draw on some real-life accounts to aid his performance. Of course, having gone to an all-boys private school, the similarities between these cultures that privilege a specific kind of masculinity (and relationships among men) are quite obvious. This certainly helped Kai to develop Nicholas as a character as well.

This role changed the way that Kai sees himself, his heritage, and how he functions in everyday life. It has been incredibly valuable to try and understand a history that still defines our present day. Hopefully this film can provide a sense of catharsis for people who suffered under these conditions for so many years, while asking why and how we might still be operating under the same toxic conditions as men and as a society more broadly.

Moffie has a strong message, and whenever you put something out that challenges or draws attention to the status quo, there is going to be some sort of negative response. However, Kai feels that both negative and positive responses have value because, if nothing else, they at least prompt robust dialogue, and that is the only way for us to move forward.

Moffie has not only made a difference in his life but shifted it tremendously. With any character that Kai plays it is important for him to get inside their world, so he worked extensively with Oliver on imagining Nicholas’s background to gain insight into why he responds to things in certain ways. When playing a character, he tries to stay away from how he would respond and rather look to the characters background for inspiration. Kai also used music to make an emotional landscape for the character, which allowed him to track Nicholas’s emotional journey sensorially.

A sense of camaraderie exists amongst the cast and crew that are like a family. For many of them, this was their first film, and Oliver made sure that they found real connections as humans before even starting filming. He remains close to all the actors, but with varying schedules it becomes quite difficult to see each other, however when they do it is always a great deal of fun.
They felt that Nicholas shouldn’t be overly physically capable. So, the role was physically challenging for Kai who loves food but, had to be leaner and miraculously managed to shed thirteen kilograms from his already lean surfer frame over the Christmas period.

Kai adores the fact that Oliver Hermanus is very specific about things, just like him. So, he never felt that Oliver was overly demanding, because he pushes himself equally as hard. ˝He is an amazing director and makes the actor feel safe and open to try new things˝, Kai told me.

Kai does not consider himself a social butterfly, but a rather boring homebody when work allows him to be. Surfing, getting into nature and spending time with family is his passion. He realises how fortunate he is to travel for work, which is always exciting, but it also reminds him of how amazing home is. South Africa is such a special place, and it always feels great to come back. 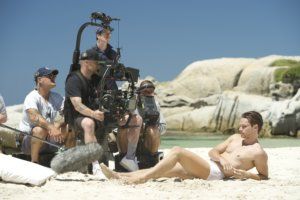 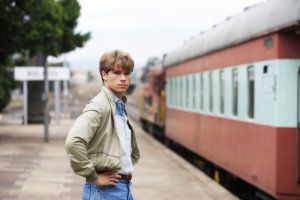 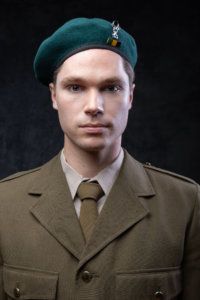