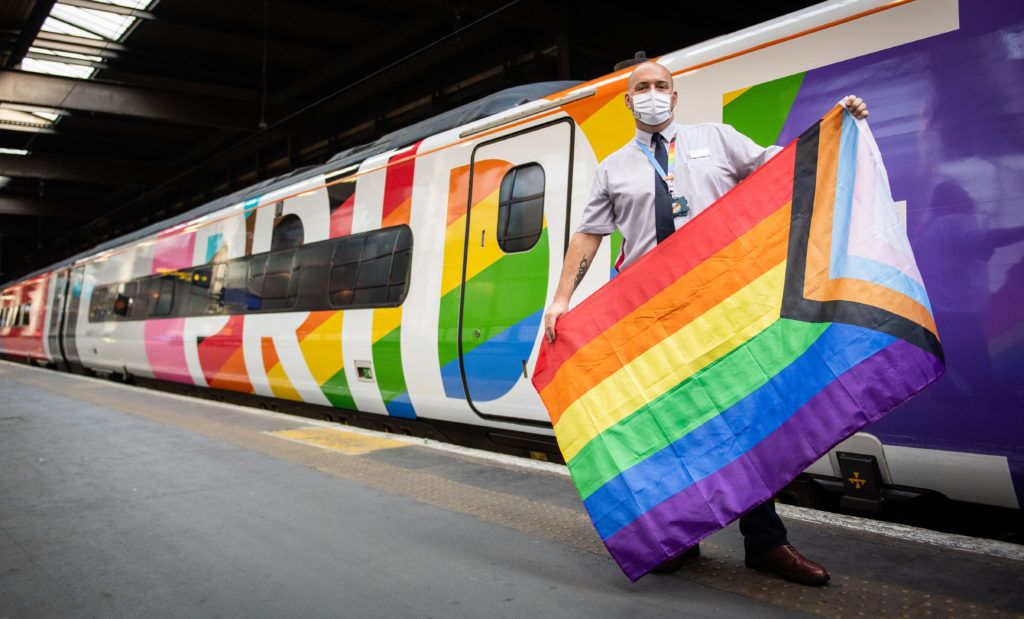 A Pride train has been launched by Avanti West Coast that will be staffed by an all-LGBT+ crew.

The company, which operates on routes from London to Birmingham, Manchester, Liverpool, Wales and Scotland, unveiled the train on Tuesday, two months after the end of Pride Month – which is actually comparatively timely for a British train operator.

The rail company has decked out one of its Pendolinos with what it says is “the biggest Pride flag the UK has seen on the side of a train”.

Pride train will be staffed by all-LGBT+ crew and filled with educational resources.

The train’s design incorporates all the colours of the progress Pride flag, making a poignant statement about the inclusion of trans people and people of colour in the LGBT+ community.

The 11-carriage, 265 metre-long train was waved off for its maiden journey by Avanti West Coast staff at London Euston on Tuesday, with the train “filled with literature, stories and colourful posters and will feature Pride related information and fun facts during the onboard announcements”.

Train manager, Paul Austin, said: “This is about being accepted for who I am and representing the LGBT+ community we serve across our network.

“Being a part of the UK’s first all LGBT+ crew is a sign of the steps we’re taking towards a more inclusive, diverse and equal society and I am so proud to be involved today.”

Public will be given chance to name train.

A competition will be launched on Tuesday to name the train, with the winning name announced in October – presumably after “Trainy McTrainface” is disqualified.

“It is a symbol of our commitment to diversity and inclusion as it travels up and down the West Coast Main Line. We live proud 365 days a year, not just today.

“I am so proud to be a part of a business where our people represent the communities we serve. We are always listening to them and customers to ensure our diversity and inclusion strategy is relevant. Our new train livery is a powerful example of keeping the conversation going.”

Not everyone is a fan so far, with radio host Julia Hartley-Brewer, the human embodiment of a Daily Express headline, getting predictably rather cross – while unhelpfully breaking the embargo on the announcement.

The radio host whinged: “It’s ridiculous corporate virtue signalling. I didn’t say it harmed me or anyone else. I just don’t understand why it’s necessary. What is the vital message that needs to be peacefully spread but somehow can’t be unless our trains are repainted?”

She tweeted: “Why do gay people need support from trains? I don’t assume a train supports straight people when it’s not painted in rainbow colours. This is utterly bizarre.”