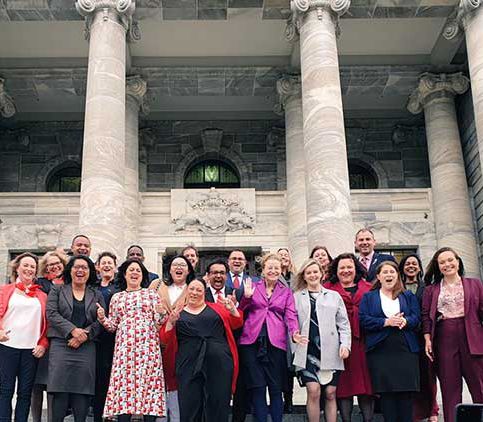 The New Zealand prime minister, lauded around the world for her response to the COVID-19 pandemic, not only won reelection, but her Labour Party now holds 64 of 120 seats in the country’s Parliament.

The election also swept in four new gay members, bringing the total count of out politicians in the country’s legislative body to 11. The center-left Labour Party accounts for seven of these gay members, including Finance Minister Grant Robertson, who is expected to become the next deputy prime minister.

Proportionately, this makes New Zealand’s National Assembly, at 9 percent, the gayest in the world. The U.K., formerly held this distinction with 45 out of 650 MPs, representing 7 percent of its Parliament.

“Numbers do matter,” Louisa Wall, a Labour MP, told The Australian. “We have a critical mass with high visibility and we’re seen as valid. If we do end up being the most LGBT representative Parliament in the world, that would be simply great.”

Ardern, 40, has been lauded for her handling of New Zealand’s pandemic response; only 25 have died from the novel coronavirus due to her decision to close the country to international tourism. A progressive, Ardern has also been praised for enacting strict gun control in the wake of the Christchurch mosque shootings.

PrevPreviousStanford doctors are among the leaders of global anti-lockdown movement that assesses the collateral damage of Coronavirus
NextThe pandemic reached Australia, lockdown began, and gradually I forgot how to be meNext