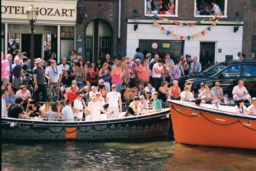 Flying KLM’s World Business Class to Amsterdam was a memorable experience. The service is impeccable and even fussy gourmands would be satisfied with the food and the selection of award winning wines. Upon our arrival at Amsterdam Airport Schiphol, we were pleasantly surprised at the efficiency and speed with which the arrival formalities were dealt with. Very impressive, considering this is Europe’s third busiest airport.

There is no time difference between Amsterdam and SA, but we were tired and looked forward to freshening up in our first hotel, the beautiful Banks Mansion. The rooms were quiet and comfortable with a complimentary bar. Gorgeous, friendly and well trained staff added to the experience. Situated on the corner of Herengracht and Vijzelstraat, the position is unbeatable – the gay area of Reguliersdwarsstraat is just a couple minutes’ walk away. It was less than 500 metres from Rembrandtplein, which is in the heart of the gay area and there are many restaurants and shops in the area. We could easily access several canal bus stopping points and trams.

Most of the gay areas are concentrated in Warmoesstraat, Kerkstraat, Reguliersdwarsstraat and Spuistraat. West and South of the old inner city centre is the most charming and the Golden Bend of the Herengracht lies south of the old centre city where all the rich merchants, bankers and aristocracy lived in spectacular canal houses. Some of these 17th century monuments have been turned into boutique hotels.

Amsterdam remains one of our favourite places with its gregarious and friendly locals. Cafés and restaurants are filled to capacity during summer from about 11h00 till quite late. We quickly got used to the sun setting only at about 21h30, meaning that dinner often only followed after 23h00. Little happens before 10h00 in the morning when shops and most museums open. The inner city is U-shaped with canals connecting to Westerdok and Oosterdok, like a spider’s web of canals, with central station in the middle. The best places to stay would be situated around the four most important canals, namely Prinsengracht, Keizersgracht, Herengracht and Singel. The most important tram routes, from a quick access point of view, would be Raadhuisstraat, Leidsestraat, Vijzelstraat and Utrechtstraat – they are like the spokes of a wheel taking you to the city centre or suburbs.

Distances on maps can be deceptive, but be prepared to walk. Everyone does. Taxis are expensive and would cost between R90 to R130 for a very short ride. Most people use the trams which operate all over the city and are always on time. Buy an I Amsterdam Card which gives you free access to museums and public transport as well as a canal cruise. Several water bus services ply the canals and make getting around and sightseeing so much more fun. Buy a multi-use ticket and use the waterbus as a more leisurely way of getting around. Most locals commute using bicycles and I’m certain that they were all trained by our local taxi drivers. They are complete kamikazes and it seemed to me cyclists actually derive some measure of enjoyment when they manage a near miss! Bicycles can be rented cheaply, but we’d only recommend that for the very brave. The old part of Amsterdam is actually very quiet for a large city and there isn’t much motor traffic. Peak hour traffic is only unpleasant if you’re trying to catch a tram (or dodging bicycles when crossing a road!). There are few traffic lights in the old city and red lights are often ignored by motorists, cyclists and pedestrians alike.

The Dutch are friendly, if a bit reserved, but never rude. The inhabitants of Amsterdam are incredibly relaxed and the term “anything goes” certainly was coined for this city. Same-sex couples strolling hand-in-hand, even displaying affection in public, the odd druggy smoking a joint on a street corner, a sex-worker monument in front of a church – it’s all there. And no-one bats an eyelid.
There is so much to see and do in and around Amsterdam – a day excursion into the countryside is a must. For a gay visitor there is every possible club, bar and restaurant you could want. There is Lellebelle, a drag club that’s a hoot. Arc on Reguliersdwarsstraat is a stunning loungey club with beautiful patrons. Take a stroll and pop in at any venue that takes your fancy, or use the free Gay Map to guide you. Take your pick from the tame to the kinky. The Homomonument situated next to the Westerkerk, close to the Anne Frank House pays tribute to all those who have been persecuted for being homosexual. Many gay tourists have their pictures taken here and there is a handy gay info kiosk nearby that also sells all kinds of paraphernalia.

Culture vultures will delight in the city’s history. The architecture is breathtaking. Old houses jostle for space beside the canals. The city was built on wooden stakes, similar to Venice, and the centuries have taken their toll. Some of the houses seem in danger of tilting over – their wonky doors and windows are almost comical. There are museums you simply have to see and others that are off the beaten path, but equally worth visiting. Go early, as the crowds can be unbearable. An I Amsterdam Card will guarantee you some queue hopping as entrance to many museums is free and you’ll sail right past all the poor suckers waiting in long queues. The Hermitage was by far our favourite. A ‘branch’ of the famous Russian museum, part of their collection is now housed in a 17th-century building in Amsterdam. We were fortunate to see a stunning exhibition of court costumes, paintings, jewellery and other items that were used at the court of the Tsars. The exhibition entitled “At the Russian Court” featured more than 1 800 treasures from the State Hermitage Museum in St Petersburg. Amsterdammers love art and galleries are found all over the city. Some of the work is excellent, and some a bit too ‘experimental’ for our taste. Explore, have a coffee or a beer and borrelhapjes (traditional snacks) at a canal-side café. Take all your own medication, including headache pills for your hangovers. You can buy as much cannabis as you like, but pharmacies are hard to find!

Now, speaking of cannabis… Smoking is banned in public places. Not that the Dutch pay too much notice to that little law. It’s a bit like a red traffic light. It’s there, so what? There are literally hundreds of coffee shops that sell cannabis. You can buy marijuana in every shape or form, from tea, biscuits, lollies and loose leaf, to pre-rolled joints beautifully packaged in transparent plastic tubes. Select your favourite brand from the menu, light up and get blissed out. But, be warned… the Dutch stuff is very potent, so make sure you don’t end up in a canal. Oddly enough, coffee shops don’t sell alcohol.

Finally the Big Day arrived. Yep, Canal Pride! The weather held and it was a lovely sunny day. A flotilla of floating faggots of every description, kink and state of dress or undress stretched, literally, for a mile or more. The banks of the canals were crowded and the bridges impassable. Even the trams stopped running. We followed the procession on foot from where it started with a bang in the Westerdok, right along Prinsengracht, up into the Amstel and finally finishing with a fizzle five kilometres further in the Oosterdok. It is an indescribable feeling to see so many people having so much fun all at the same time, with no aggression or street brawls, even though alcohol was consumed in galactic quantities. The city had banners up for weeks leading up to the parade and there were loads of events catering to every taste and sub-sub-sub culture in the weeks leading up to parade day. Getting a good vantage point was not easy and we envied those who were spilling out of the canal houses and the boathouse residents. Balloons and flags were draped from windows and raucous onlookers cheered the parade as it passed. This was a day to remember and street parties went on till late all over the city.

The Canal Pride Parade starts at 14h00 on the first Saturday of August and follows Prinsengracht from Westerdok around the city then makes a left turn into the Binnenamstel past the Stadhuis to Oosterdok where the procession finishes. The best views are at Westerdok and the Jordaan area if you get there well before 14h00. After 14h00, 500 000 people turn out to see the parade and photography is almost out of the question. First prize would be to stay on the fourth floor on the Western side of Prinsengracht, in the Jordaan area, because the sun would then be behind you. It is a postcard pretty part of Amsterdam with interesting shops and beautiful trees.

We stayed at Hotel Orlando, a small five-bedroom hotel situated in an old canal house on Prinsengracht on the Friday and Saturday of Canal Pride. The location was quite central, but sadly we didn’t have good views of the parade from the hotel, but it provided a great mid-point stop to freshen up during our “long march”.

From Orlando we moved to the newly refurbished Crowne Plaza Hotel on Nieuwezijds Voorburgwal close to the station. The hotel offers great Executive Club Level accommodation with access to a stunning rooftop terrace and bar, with drinks included. The hotel is only twenty minutes’ drive from the airport and located close to the red light district, which is not as seedy as one would imagine, and lots of great shops. Die Beienkorf department store is close by, as is the Royal Palace and Dam Square. We did some last-minute shopping and picked up a few gifts at the shops close to the hotel. We paid a sad farewell to this wonderful city with rooftop drinks at the hotel on our last night. Amsterdam and Canal pride was everything, and so much more than we’d hoped.
Our trip was made possible by the kind people at KLM Royal Dutch Airline and Wilco van Eeden of Club Travel honeydew. 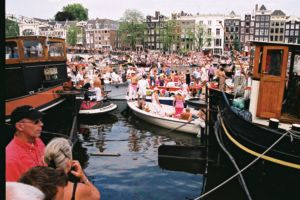 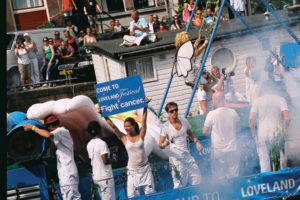 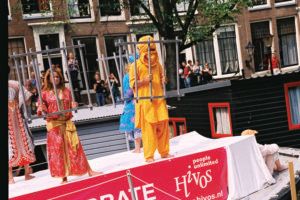 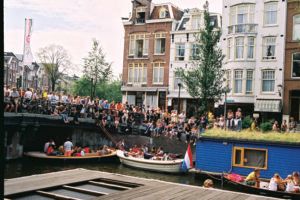 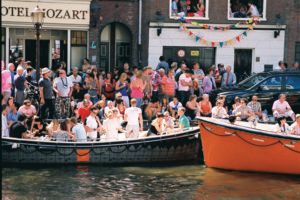 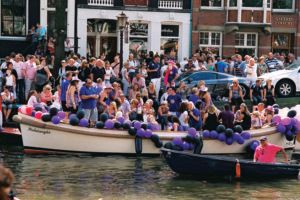 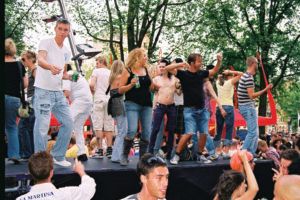 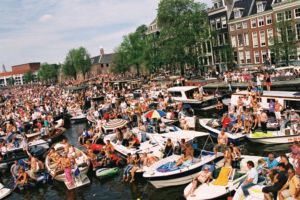 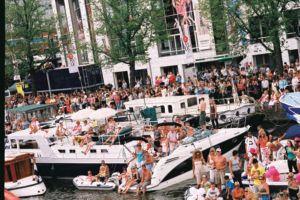 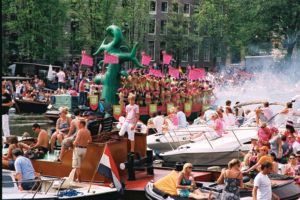 PrevPreviousThe pandemic reached Australia, lockdown began, and gradually I forgot how to be me
NextPresident Ramaphosa’s new deal requires a lot of money that we don’t haveNext