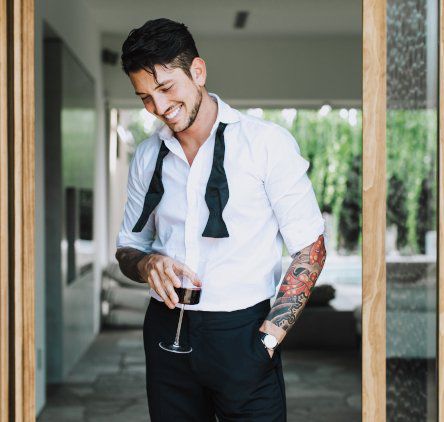 Gabriele Bertaccini of the Netflix series Say I Do hasn’t let HIV keep him from a beautiful life. And he wants the same for you.

When chef and caterer Gabriele Bertaccini (known to most simply as Chef Gabe) accepted the plum position of culinary expert and event planner on Netflix’s reality wedding series, Say I Do, he had absolutely no plans to disclose his HIV-positive status on international television. But that’s exactly what he did — and on the very first episode, no less.

“I call it my second coming-out,” Bertaccini, who’s gay, says of the beautifully genuine moment, which was born out of a conversation between two men simply discussing their individual health issues. “My second coming-out, in that moment to Marcus [the groom-to-be in the episode], was in response to his own vulnerability in opening up about something that clearly affected his life, and it’s very intimate.”

In that moment, Bertaccini realized he not only had an opportunity to bond with and support a fellow human being, he also had the chance to deal a powerful blow to the enduring stigma around HIV.

“I realized in that moment that it could only have been matched by me with the same amount of authenticity and openness,” says the handsome and heavily tattooed 34-year-old. “It felt that there was no other choice for me to respond than by sharing with [Marcus] that we have a lot in common. The diagnosis might be different — it’s type 1 diabetes for him. It’s HIV for me. But the feelings of insecurity, of fear, of the lack of self-worth, the stigma that comes with it — it’s the same. Those things are the same.”

“It was a moment that was very magical,” Bertaccini continues. “[Marcus] showed me the importance…of opening up and not being afraid of unpacking our baggage, of being who we are, of telling people about what has happened to us, and being able to do so with somebody that answers you back in the same way and holds space for you and your story…. We have to have a conversation. We have to be open about it. And most importantly, we have to acknowledge our self-worth. We cannot be ashamed of our stories.”

Before he won us over with his authenticity and charm on Say I Do, Bertaccini was busy traveling the world, studying his craft, and eventually launching a successful catering and event planning businesses. Born in Florence, Italy, Bertaccini trained at the Buontalenti Institute of Culinary Arts and Management and worked in restaurants across Italy before relocating to the U.S.

He first spent time in Arizona, where he earned degrees in journalism and public relations from Arizona State University. In 2008, he started his first catering business, Il Tocco Food. Known for its authentic, multicourse Italian style meals, Il Tocco has enjoyed enormous success across the American Southwest.

When the conversation returns to “Firenze” (Florence in Italian), it’s apparent Bertaccini still holds his homeland close to his heart. “It’s probably one of the most beautiful cities in the world,” he says, admitting he didn’t fully appreciate it as a boy. “When you live a reality, it’s difficult to also be aware of how special and magical the reality is because you become used to it. It’s only really when I left [at 19 to study abroad]…that I really felt it in the heart. I was like, Oh, my God, I’m missing it so much. Why?

“I realized how magical that place is, how it’s basically an open-air museum that’s inspiring everywhere you look,” Bertaccini continues. “It could be a corner of a street or…an older grandmother peeking through the window. It could be the smell, the sound of the church bells going off every 30 minutes. There is a magic that comes through the ritual of life. Every little thing that you hear, you taste, and you smell, it’s part of that magic. It’s a movie that happens every single day…. I try to go back as much as I can.”

Still, coming to America had always been the ultimate goal.

“I always had this American dream in mind,” Bertaccini says. “I grew up with a father who was very supportive of that — my family, my mom too — but my father especially. I think one of his earlier dreams as a teenager was to live in America, come here and immigrate, and he couldn’t do it because…his father died in war, so he had to take care of the family. He had two sisters and the mother. He didn’t have the funds to come…. I think he lived his own dream in me. I definitely never felt pressure doing it because it felt such an even greater gift to be able not only to live this for myself but also to live this for him. It was very beautiful.”

These days, Bertaccini splits his time globetrotting between Arizona, New York, California, London, and Italy, but when we caught up with him, he was sheltering in place in the Los Angeles area. In fact, the self-described “doggy daddy” and avid surfer said he had big plans to catch some waves later that day.

“I’m lucky. I’m fortunate that I live in Venice, right on the ocean, on the sand. I’m looking out as I’m speaking to you, and the waves look quite beautiful…. I’m a master in doing a little bit of everything,” Bertaccini says of his very Italian way of life. “So I’ll jump in the ocean, then come back to a little bit of work, then take a little nap. It’s the yin and the yang.”

The fact that he holds to this philosophy is no accident. Bertaccini says he works to stay conscious of this balance and not get sucked into the workaholic American way of life — which can be especially challenging, he says, in the entertainment industry.

“One day I read this quote, I think it was [in] a book, actually. It said in the States, we work towards retirement…and we work hard because then we’re like, ‘We’re going to take this very big chunk of our life [to work], and then we’re just going to relax.’ Well, it’s actually important to take mini-retirements in your life. It’s a little bit of everything. In Italy, we do that often. You do a month and a half of vacation every year.”

Bertaccini also admits that before signing on with Say I Do, which premiered in July on Netflix, he didn’t have plans to join the ranks of celebrity TV chefs and had turned down such offers before. “I had five different people in a span of two weeks telling me about this casting…. At first, I was like, ‘Yeah, sure, just give them my email and we’ll figure this out.” And then, after the third, fourth person was telling me about it, it was basically like the universe crying, ‘Hey, here you go! Believe me.’”

The feel-good show from the creators of Queer Eye features Bertaccini helping to create idealized wedding experiences for eight diverse couples, one per episode. Bertaccini, interior design expert Jeremiah Brent, and fashion designer Thai Nguyen oversee inspirational ceremonies that are less about showing off and more about celebrating love, friendship, and commitment. The show just felt right for Bertaccini.

“I had the chance of doing TV before,” he continues. “It was never really a fit for what my philosophy in food and wine is or what I do in life and what I think about life…. It felt very disingenuous, anyway, not authentic…. And then, Say I Do came along and it felt right. They approached me…and then, of course, fell in love with the project…. If I can use my skills of being a crazy chef through something like that — and help other people to not only really enjoy a beautiful meal but understand a little bit more about what makes life precious, then why not? It was a beautiful project.”

As for what his future holds in this uncertain world, Bertaccini remains characteristically optimistic, despite the dark times.

“I try to live in the present as much as I can,” he says. “I also try to enjoy the product of our efforts that we have put into the production of Say I Do. I think it’s very easy, especially in the Western world, always to achieve something and then be like, All right, moving on. What’s the next thing? and not be even able to savor it. It’s like if I gave you a beautiful plate of pasta that you have been craving all your life. Now you’re like, OK…what’s the main course? What’s next? I’m trying to enjoy this as much as I can and pay respect to the process and to the people that really work hard behind it.”

After further reflection, Bertaccini concludes, “Hopefully, [the future] will hold amazing food! Hopefully, it will hold the ability to create spaces all around the world for people to come together and not only experience amazing food and wines but just basking in the beauty of life and the understanding that there is so much more than just working, working, working all the time — that we should fall down sometimes, and we should just really connect on a deeper level.”