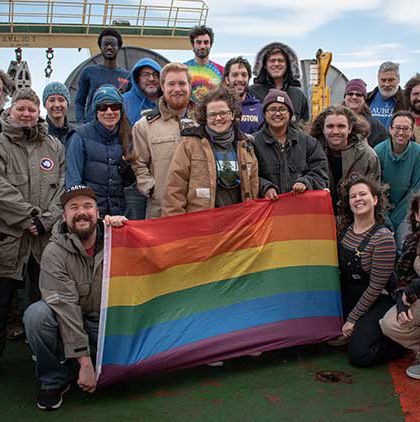 The event showing LGBTQ+ Pride was formally inaugurated by the governments of the British Antarctic Territory and South Georgia & the South Sandwich Islands.

Polar Pride coincided with the International Day of LGTBQ+ People in STEM, which aims to bring diversity to the fields of science, technology, engineering, and mathematics. This outreach is needed, as a new study showed that gay men are less likely to have degrees in these fields. The event also is part of a series of diversity initiatives that commemorates the 200th anniversary of Antarctica’s discovery.

Baroness Sugg, minister for the Polar Regions, said in a statement that Polar Pride is an opportunity for workers in these places “to celebrate diversity and show their support for LGBTQ+ colleagues. I also hope Polar colleagues in the U.K. will get involved, to make everyone feel included to play their role in understanding and protecting the amazing Polar Regions.”

Dr. Huw Griffiths, an out biogeographer at British Antarctic Survey, added, “This announcement feels like a huge step forward and a visible symbol of inclusion and support for the LGBTQI+ community working in BAS, SGSSI, and in international polar research.”

“We started Pride in Polar Research two years ago when an early career researcher reached out seeking solutions to the isolation and discrimination they faced,” Griffiths added. “At the time these issues weren’t openly talked about in the scientific community. This announcement shows the important progress we are making towards greater inclusivity.”

On Wednesday, social media filled with images of Polar Pride from LGBTQ+ researchers and workers in these icy regions. See a sampling below and find more on Twitter’s #PolarPride hashtag.