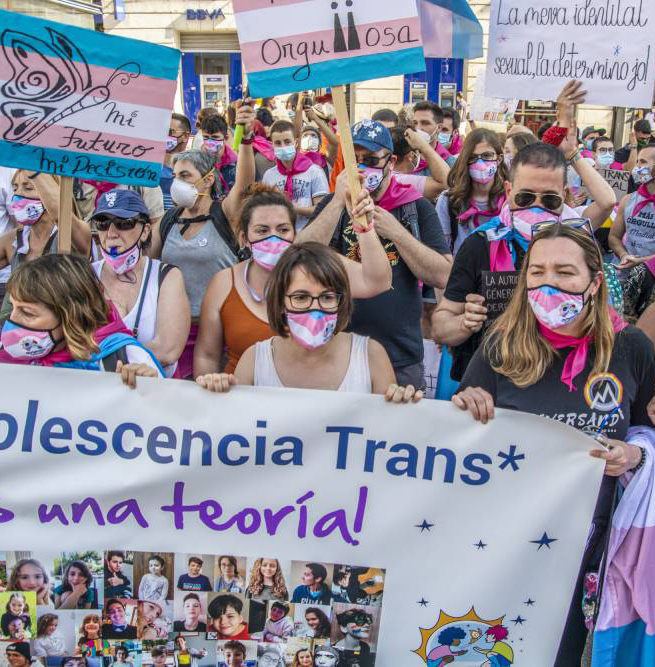 Spain has announced proposals to issue fines of up to €150,000 to anyone found promoting conversion therapy in the country.

Minister of equality Irene Montero championed the legislation. Montero said the law is in the draft stage and covers a range of measures including specific laws around intra-gender violence in same-sex couples and fines for those found promoting conversion therapy.

The draft defines conversion “the practice of aversion, conversion or counter-conditioning methods, programmes and therapies” aimed to modify or change a person’s sexual orientation, gender identity or gender expression.

According to reports by EuroWeekly, Montero will discuss proposals which also include fines of up to €10,000 for any professionals or businesses found to have discriminated against someone because of their sexual orientation, gender identity, gender expression or sexual characteristics.

New laws are also expected protection to intersex people or those “who do not correspond to socially established notions of male or female bodies”. The law will prohibit “genital modification” operations on intersex newborns, “except in cases where medical indications require otherwise” to protect their health.

Parents in Spain may request the baby’s sex “appears blank” on the civil registry for a maximum period of one year.

The news comes as the Spanish government announced it will allow people to change their gender without having to go through medical consultation or receive a formal diagnosis of gender dysphoria.

The “Trans Law” will get its first reading before Spanish parliament this month. It will allow people over the age of 16 to alter their gender on official identity documents which will have the options of male, female or non-binary.

Spain has allowed people to change their gender without gender reassignment surgery since 2007, but individuals must have evidence that they have a diagnosis of gender dysphoria.

Minors will also be allowed hormone blockers at the start of puberty. Current laws mean that minors can only take hormone blockers when they reach puberty, and they must have parental consent.

The government has repeatedly promised to ban the traumatising practice, but conversion therapy remains a reality across the UK. Prime minister Boris Johnson said in July that the practice was “absolutely abhorrent” and has “no place in this country”. Yet, the government has not published details of a ban, saying it commissioned research and would outline its plans “in due course”.

Alicia Kearns, a Tory MP for Rutland and Melton, reaffirmed her party’s commitment to banning the practice in an article for Politics Home. She has insisted that any legislation must also prohibit attempts to change a trans person’s identity.

Kearns said she has worked with 15 LGBT+ advocacy organisations and eight religious denominations over the last few months to form a proposal to the government on banning the practice. She said LGBT+ people need “specific legislation” to tackle conversion therapy so that those responsible can be properly prosecuted.

In December, more than 370 religious leaders from around the world are calling for a ban on conversion therapy. The signatories to the declaration represent all the world’s major faiths and many are known LGBT+ advocates. They include South African cleric Archbishop Desmond Tutu, former chief rabbi of Ireland David Rosen, the Anglican bishop of Liverpool Paul Bayes and Mary McAleese, the former president of Ireland.