Above the troubled water: Gay Nigerian men living in exile 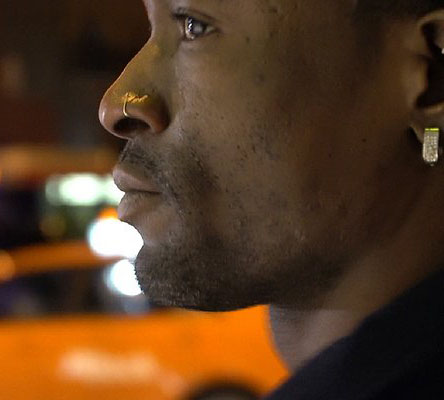 This film documentary will have its world premiere at the BFI Flare Film Festival 2021, which takes place from 18-28 March 2021.

In 2016, I was preparing to fly to Lagos, Nigeria. I had navigated the laborious submission process for a visa, and my flights and hotel were booked.

I was making a film about Bisi Alimi, accompanying him on his first ever return trip since he had been forced to flee nine years earlier. In 2004, Bisi [pictured below] came out as a gay man on a popular daytime television show in Nigeria, live to over 4 million people.

Only weeks previously, the president at the time, Goodluck Jonathan, had alerted the nation to the fact that “there are no gays in Nigeria.” After Bisi’s coming out, there was a huge backlash. Parliament debated his ‘act of defiance,’ he received death threats, and lost his job as an actor on an up-and-coming sitcom series. After three years of living in fear, and a gruelling attack which left him within inches of his life, he fled to the UK seeking asylum.

“If I was feeling nervous, I couldn’t imagine what Bisi must have been going through”

I was so moved by Bisi’s story after I met him at the Eagle bar in Vauxhall, that I immediately asked if I could start making a film about him. To my surprise he agreed. As we started working together, I realised that joining him on the trip to Nigeria was so important for the film, crucially because Bisi’s coming-out story was set in the past, and as a documentarian I am always searching for a link to the present. His return presented the perfect opportunity to find this current thread.

I was anxious in the days before we were supposed to leave. I had consulted a friend who works at the BBC about filming in a crisis, if anything dangerous were to happen. My film was put together on a shoestring budget, I had no producer, no researcher and no broadcaster backing me up if things went sour, and I was travelling with the only publicly out gay man on television in a very homophobic country. If I was feeling nervous, I couldn’t imagine what Bisi must have been going through.

Three days before we were about to leave, I received a letter. My visa had been denied with no explanation. I racked my brain to figure out what had happened. Had they looked into me? One of my previous films Stepping Out, about a transgender friend had received some traction playing at film festivals.

Perhaps it was because of that film? I hastily gave Bisi a handicam and told him to film as much as he could, but when the rushes came back, it didn’t quite work as I had hoped. I was devastated. I had lost a lot of money, and I couldn’t see a way forward for the film.

After many months of brooding, I remembered how Bisi told me about friends of his who he lived with in Lagos, who were now scattered across the globe, specifically Damoshe in New York, and Ade in Toronto. Thus began the long journey to make my film Above the Troubled Water, about three gay men, including Bisi, who were forced to flee their home in Nigeria because of their sexuality.

The visa denial, which I thought at the time was a disaster, turned out to be something to be celebrated. It shifted my focus entirely. My film now deals with the theme of living in exile, the legacy of shared trauma, and of friendship. Instead of going to Nigeria, creating somewhat of a sensationalist narrative, my film deals with the subtle and domestic struggles of adjusting to life in exile. It’s the everyday that I became more interested in. The question on my mind throughout filming was “How do we in our LGBT communities welcome and support those that have fled trauma, seeking asylum?” Too often they are excluded.

The shift in filming also taught me an important lesson. As a queer, white filmmaker with certain privilege, how could I create a safe space for the contributors to talk freely and share their stories? Rather than what might be interpreted as a condescending film about Nigeria, where the majority of homophobic law was learnt and imprinted through British colonial values?

Above the Troubled Water will have its world premiere at the BFI Flare Film Festival 2021 from 18-28 March 2021. It is in the shorts category under “For the Record.” All shorts will be available and free to watch for the duration of the festival to UK audiences only.

PrevPreviousThe rise of the gay killer
NextLiza Minnelli at 75: A tribute to the ultimate gay iconNext