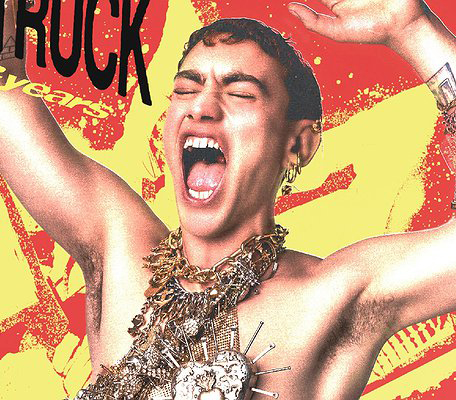 The chart-topping singer and star of It’s A Sin, 30, unveiled the name and artwork for the track on Tuesday (23 March) ahead of its release on 8 April.

Sharing the artwork for ‘Starstruck’ on Twitter, former Attitude cover star Olly wrote that he was “really really excited” for the single’s release.

The announcement of ‘Starstruck’ comes just days after Years & Years revealed that two of the group’s original members, Mikey Goldsworthy and Emre Türkmen, were leaving the band and that it would continue as an Olly Alexander solo project.

As a trio, Years and Years scored four UK Top 10 hits, including 2015 chart-topper ‘King’. The group’s debut record, Communion, was named Album of the Year at the 2015 Attitude Awards.

In Mikey and Emre’s exit statement, the group made clear that there was no bad blood between the boys, with Emre leaving to focus more on writing and producing, and Mikey committing to playing live with Years & Years in the future.

“Dear Y&Y fans, there’s been some changes that we want to fill you in on. This upcoming new album has been an Olly endeavour and we’ve decided that Years & Years will continue on as an Olly solo project,” a statement published to Instagram last week read.

“The three of us are still good friends. Mikey will be part of the Y&Y family and play with us live and Emre will focus on being a writer/producer.

“These past twelve months have been crazy for us all and we want to thank you for the love and support you’ve given us over the years (& years). More Y&Y music will be coming up this spring.”

Years & Years recently released a song – a cover of the Pet Shop Boys track of the same name – to celebrate the release of the TV series, in what now marks their last track as a trio.

PrevPreviousThis is why straight men have sex with other men
NextHow do we know Covid vaccines are safe?Next