Hell Bent for Metal: the podcast for LGBTQ rock fans 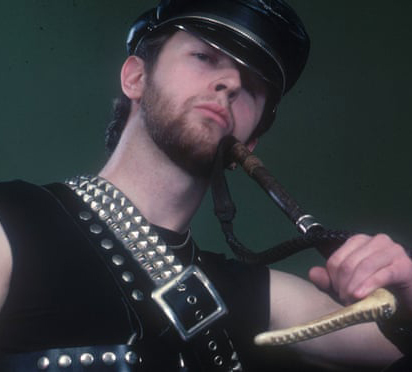 Tom Dare’s hilarious podcast celebrates what he calls a ‘really gay’ scene – and has tackled its homophobia.

It quickly became clear what you were getting: it’s gay, it’s about heavy metal, and it’s very, very funny. As a gay rock fan, HBFM founder and co-host Tom Dare’s hope was to be visible to other LGBTQ+ lovers of heavy music, and to offer a queer perspective that he felt was missing from a scene that is still affected by homophobia.

In one episode, they discuss July by Swedish band Katatonia, a song whose gender-neutral lyrics chime more with him than the usual heteronormative love songs. At the other end of the spectrum, there’s loincloth-clad “Kings of Metal” Manowar, covered in the episode Joey DeMaio’s Budgie Smugglers, named in honour of the buff bassist’s tight little trunks. “I know some people think Manowar look gay, but I can be more specific about it,” he says. “I can go, ‘This bit looks gay, and that bit looks gay, and those boots …’” He laughs. “Basically, metal is really fucking gay.”

But as Dare knows himself, it can also be a lonely scene. “Before I started it, I knew there were other gay metal fans out there, but I didn’t know who – I knew about three other people,” he says. The list of gay artists he could invite on the show isn’t long, either. After naming Judas Priest singer Rob Halford, metal’s most obvious and iconic gay star (“He’s not just gay, he’s ‘I like wearing assless chaps’-gay”, says Dare), most fans would probably struggle to name a second.

Hence the podcast, a flashpoint for fans to find one another. He wishes something like this had existed for him aged 18. At the same time, he hopes that all metal fans will hear and understand some of the lesser-heard voices in the scene.

To do this, HBFM is charged with “humour, optimism and positivity”, to celebrate the good. “I don’t want to talk about homophobia,” says Dare. “It’s horrible!” But he felt there was no choice but to react to it, in an episode bluntly named Internet Metal’s Homophobia Problem, recorded following the announcement of the debut album by Man on Man, founded by Faith No More’s gay keyboardist Roddy Bottum.

“To have someone from a band like Faith No More going, ‘I’m gonna do a record about how I like fucking my boyfriend’ – for the gay community that’s, like, ‘Yes! Finally!’” says Dare. “We’ve had all these years of Mötley Crüe and that bollocks, now we finally have something that we can look at and not think: ‘That’s not for us.’”

But beyond that gay community, the sight of two men embracing one another in the video for Man on Man’s single 1983 provoked a different reaction. In the comments section of a news story about the release on the website Blabbermouth, people wrote: “U can run the story without the pictures … not against what he is doing but come on”; “How many times is it possible for one to throw up in his own mouth?”; “Gross gross gross.”

Many in the metal scene are proud of its inclusivity, including Dare, who calls it a place for “misfits and fish out of water looking for a home”, including himself. But he’s also heard plenty of comments like this at gigs. Some of this he puts down to ignorance, “bad humour” and “poorly chosen vernacular” – the mouth working before the brain – and says that most people, after a short chat, would be enlightened. But online displays like the reaction to Man on Man are sadly all too common. “We couldn’t ignore it and say it doesn’t matter, because we did see it and it does matter,” says Dare. “You can develop thick skin, but you’re still getting cut.”

This is something Halford, who came out in 1997 after over 25 years in the public eye, has also commented on recently. “We still talk about sexual orientation, skin colour, or, ‘my religion’s better than yours,’” he told Kerrang! magazine. “You’d think people would have moved on after such a long time. Now that I’m moving through my OAP heavy metal years, I thought a lot of it would be gone by now. And it’s a shame.”

PrevPreviousNick Hudson lockdown talk is a must-watch!
NextProtests ahead of hearing on Namibia gay man’s twinsNext