The arrival of gay retirement homes 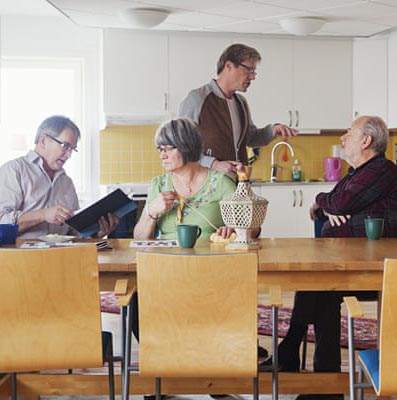 We’re all getting older. According to research by Stonewall, the UK lesbian, gay and bisexual charity, there are currently between 871,045 and 1,219,470 gay and lesbian adults aged over 55 in the UK – a figure roughly equivalent to the population of Birmingham.

By David Hudson and Jason Gray

With a rise in the number of LGBT baby boomers, could the development of gay retirement homes become a new growth area in the property market?

Until recently, few agencies have acknowledged the specific needs of the LGBT communities over the age of 50, but this is changing. In England, Age UK Camden runs its groundbreaking Opening Doors London project, providing social events and befriending services for LGBT people. In the north, Stonewall Housing and the Manchester Older LGBT Housing group have just announced the launch of The North West Housing Guide for the older LGBT community. In the US, where there will be an estimated four million LGBT individuals over the age of 65 by 2030, LGBT housing developments for seniors are being developed in Chicago and Philadelphia – with more likely to follow.
In Europe, details have emerged of two unrelated developments – one for renters and one for potential homeowners – both aimed at the older LGBT market.

France
The Villages Group – Rainbow
In what is believed to be a first for Europe, a property developer is commencing building work on a retirement village exclusively aimed at the LGBT community aged 50+. The Villages Group – Rainbow [artist’s impression above] will be a seven-hectare gated community of 107, one-bedroom, one-level eco-friendly/energy efficient “village-houses” – complete with concierge services – nestled in the heart of the Languedoc region of South West France.
Villages Group specialises in the ‘active living’ resort for over-fifties in France. It is also currently working on two other developments – including an equestrian/ranch-based development and a lakeside project.
“Gay baby boomers are the first generation to come of age after the gay rights movements in the 1970s and with the gay marriage law recently passed in both England, Wales and across the channel in neighbouring France, many in the LGBT community have felt more open about their sexual orientation than previous generations,” said a spokesman for the group.
The gated community – which is expected to be ready for occupation by early 2015 – will feature 107 ‘maisons’, as well as a hotel with restaurant, bar, gym, Jacuzzis, saunas, leisure centre, tennis courts and swimming pool.
Residency, however, doesn’t come cheap. Shareholdings begin at €236,000 – which allows you a choice of interior colours, and choices over fitted kitchen and bathroom. The management and maintenance fees are €70 per week, which covers all management and maintenance services, on-site activities and entertainment, and property tax.
For more information, check www.thevillagesgroup.com/rainbow

Sweden
Stockholm – Renbågen
Sweden has long had a reputation for its liberal attitude towards sexuality and acceptance of equal rights for gay people, so it’s not entirely surprising that it has recently opened what is believed to be the world’s first LGBT retirement home.
Renbågen (the Swedish for rainbow), is located in an eight-story apartment complex in the heart of the capital, Stockholm. Unlike private property developments, which require significant investment from those wishing to live there, it has been developed by a Swedish cooperative renters association, also called Renbågen.
It has been designed specifically for tenants from the LGBT community who are 55 or older (although heterosexual residents are also able to apply for an apartment). The complex has been in development since 2009, and officially opened on 22 November 2013.
It consists of 27 flats at the top of the building, which currently house approximately 40 older people, giving them the chance to live alongside other like-minded people and make new friends in a new community. This comes at a time when, according to a recent Stonewall study, older LGBT people are three times more likely to live alone than their heterosexual counterparts.
Resident and Vice-chair of Renbågen, Lars Mononen, explained the importance of the scheme, stating “Renbågen gives us all a little bit of an extra social safety net and lets us be a part of an active community. This is a place where people actually seek out contact with their neighbours, rather than try to avoid it.”
The project has gained so much attention that other, younger members of the Renbågen renters association – some only in their 30s – have expressed an interest in adding their names to the waiting list. The Renbågen association hopes this will start a trend for the development of further LGBT housing opportunities.