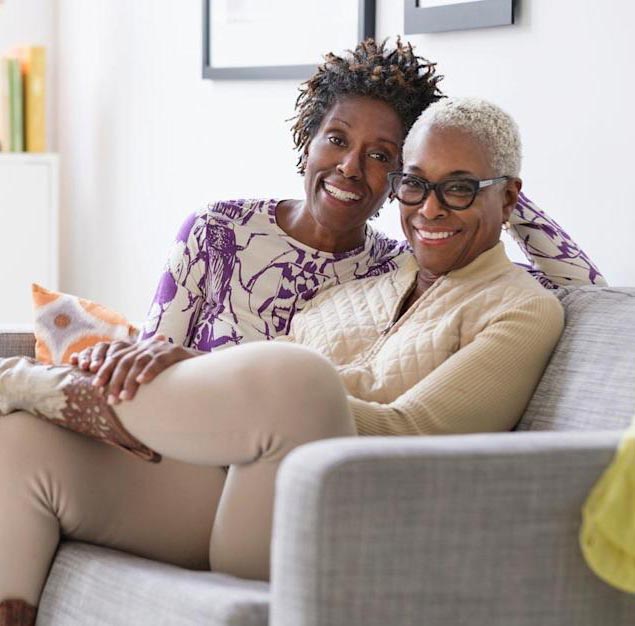 Moving to an assisted living home should never mean stepping back into a closet.

That seems obvious to those of us living out and proud lives in post-Stonewall Riots America. But fears of rejection and of being ostracized are ever-present realities for many seniors in — or considering moving to — shared senior living communities.

I saw the fear firsthand when I volunteered at a senior living community in Washington, D.C., a few years ago. Steven was 71 then, with round John Denver glasses, longish silver hair, and an agile mind, but he was dealing with the aftermath of two strokes, which left him unable to walk and in a wheelchair. I said hello and, after a few minutes of small talk, he told me he was gay and uncomfortable in what he thought was a homophobic environment.

“I lived the last 25 years of my life as an openly gay man in Dupont Circle,” he said. “Then I came here this year because there was nowhere else to go, and I’m scared to be myself. Gay people are either invisible to, or unwanted by, the people here. So I stay quiet.”

I asked the management if they specifically trained the staff to support LGBT residents, and the director nodded in somber admission of the problem. “We’re working on it,” she said.

The Rise of LGBT Senior Housing Options: A Clear Need

She’s not the only one “working on it.”

LGBT senior housing options have gained steam in the last decade, led by the rise of older LGBT baby boomers.

“I get calls from LGBT seniors who ask, ‘Where can I go where I know I will be safe and treated fairly?” says Chris McLellan, writer and coordinator of Senior Services for SunServe Social Services in Broward County, Florida, which serves the LGBT-dense population of Fort Lauderdale.

Of course, this forward-thinking movement to create LGBT-friendly retirement communities, with built-in acceptance and a supportive environment, makes sense. The National Gay and Lesbian Task Force estimates 3 million LGBT elders live in the United States, and that number will double by 2030.

“There is a real need for this housing,” Michael Adams, executive director of SAGE (Services and Advocacy for Gay, Lesbian, Bisexual, and Transgender Elders), told the New York Times recently. The need isn’t just based on numbers. He was commenting on the results of a recent study in which the Equal Rights Center in Washington enlisted testers in ten states to pose as either gay or straight couples and make phone calls to senior living facilities. In almost half of the cases, the same-sex couples faced discrimination from housing agents, who didn’t mention the vacant units presented to straight couples.

Once you’re actually living in a home, it’s often the little things that are troubling. “For example, someone sits down at dinner at a typical home and asks you on the spot about your wife and kids,” says Steve Krege, COO of Northstar Senior Living, which manages the LGBT-focused Stonewall Gardens in Palm Springs, California, set to open in September 2014. “Do I tell the truth or not? Will they think differently of me? You don’t want to put someone in that situation, especially when the majority of 70- to 80-year-old residents may still feel the pull of the closet.”

It’s only natural that most people want to live and age in places where they feel welcome and respected.

“For LGBT people, especially those with a lengthy history of having been stigmatized, ostracized, and victimized because of their LGBT status, finding a place that will feel safe can be very difficult,” says Hilary Meyer, director of National Programs for SAGE (Services and Advocacy for Gay, Lesbian, Bisexual, and Transgender Elders), which maintains a list of LGBT-specific senior housing projects that encompass all levels of care, ranging from independent living to skilled nursing.

“Currently, there are very limited options,” says Molly Gallaher, vice president of operations for Oakmont Senior Living, which operates Fountaingrove Lodge in Santa Rosa, California, one of the first continuing care retirement communities (CCRCs) for LGBT seniors and their allies.

But the real question is, can we provide more prejudice-free and inclusive facilities for the aging LGBT community, where they feel as much sense of community as other residents?

Given LGBT senior housing options popping up all over the country now, what have we learned from earlier challenges that will help these new efforts be successful? Here are five ways to create healthier, happier LGBT senior living options:

1. Learn From Past Mistakes

The sporadic success of LGBT senior homes over the last decade has puzzled me. Especially with the growing LGBT older population, how could there be a problem? Plans for about two dozen retirement communities aimed at the LGBT population were scrapped, due, in large part, to the collapse of the real estate market. But that’s not the only reason they didn’t work. Some LGBT senior homes closed for economic reasons. Others morphed into residences for the general population, due to location. The Rainbow Vision community in Santa Fe — which opened in 2006, declared bankruptcy in 2011, and is now a mainstream assisted living community — is an example of one such home. “Some just weren’t built in the right demographic,” says Northstar Senior Living’s Krege. That makes sense. For example, why would LGBT seniors who found safety and community in urban areas want to be isolated? “There’s a burgeoning LGBT community in Palm Springs,” says Krege. “So creating our new housing in Palm Springs, where 50 to 60 percent identify as LGBT, according to our research, tells us, ‘Go where the community is.'”

“The struggles encountered in the early days of LGBT senior housing projects were, to a large extent, attributable to a lack of public support,” says SAGE’s Meyer. “But in the years since the first LGBT housing projects were initiated, our culture has become increasingly accepting of LGBT people, and better educated about our unique needs and experiences. We’ve learned that public education is a critical first step in these projects.” While there’s been progress, it’s important to point out where it’s still needed. For example, many may not know that, while private and public housing offer protections on the basis of race, color, national origin, religion, gender, disability, and familial status, there are no explicit protections based on sexual orientation and gender identity for LGBT individuals under the Fair Housing Act.

“My personal belief is that we need more integrated facilities,” says SunServe Social Services’ Chris McLellan. “While there’s certainly a need for LGBT-specific housing, I think we should look more toward LGBT-friendly housing where they show ‘LGBT-competence’ — meaning their staff and management have been trained and certified in managing LGBT seniors.”

Market and cost issues for LGBT senior housing are similar to those of senior homes across the board. You pay more based on metropolitan versus rural, and also based on the type of services needed, type of home (e.g., independent, assisted living or skilled nursing), and amenities (e.g., high-end versus basic). But LGBT-specific housing isn’t viable in some areas, and some may simply prefer being with a mixed group, which means more LGBT-inclusive (or “friendly”) homes. First, those homes have to pass the test.

“If businesses are going to go after the LGBT dollar, they can’t just put a gay flag on their window and say they’re accepting,” says McLellan. “If you have a staff of ten and not one has worked with — or is a member of — the LGBT community, how do they know the nuances for what the LGBT need? It’s trendy to get on the bandwagon of being ‘gay friendly,’ but it’s how you demonstrate it that counts.”

LGBT-sensitivity training should be required for all senior living communities that want to make their LGBT residents feel safe and comfortable.

Local and national LGBT advocacy organizations such as SAGE provide cultural competency training so that even those without an LGBT-specific focus will be able to create the safest, most welcoming and respectful communities possible. It seems to be working.

“We’ve done competency assessments and policy reviews and then had success with LGBT senior sensitivity training in several locations, including Five Star Premier (Pompano Beach, Florida) and Five Star Park Summit (Coral Springs, Florida),” says McLellan. “We’ve heard from the LGBT singles and couples in the facility that this training made a positive difference. That in and of itself provides a comfort zone for seniors evaluating their prospects. Like in any other business, your best sales people are those who’ve already purchased.”

5. Foster a Sense of LGBT Community

I am not saying that every LGBT-friendly senior living facility needs a Donna Summer disco night, but then again, why not?

“At Fountaingrove Lodge, the activities and events are geared toward what the residents want, so the social calendar is packed with great LGBT events and activities,” says Oakmont Senior Living’s Molly Gallagher. “These include attending pride celebrations, a flag-raising ceremony for Gay Pride Month, a dance party with the band Pride and Joy, and a trip to the de Young Fine Art Museum. Many LGBT seniors had to live in the closest for so many years, or lost their jobs due to being gay. They want to live their golden years out and proud!”

It’s heartening to see progress and know there will be greater awareness and fewer concerns about inclusion facing LGBT seniors in 20 years. But there’s still the issue of today, as I learned during visits to the Washington senior home where I’d met Steven. Last time I saw him, he told me he’d noticed a few improvements.

“The staff seem like they’re a little more open, and I came out to a couple of them,” he said. “One told me about her lesbian aunt who may move to assisted living soon.”