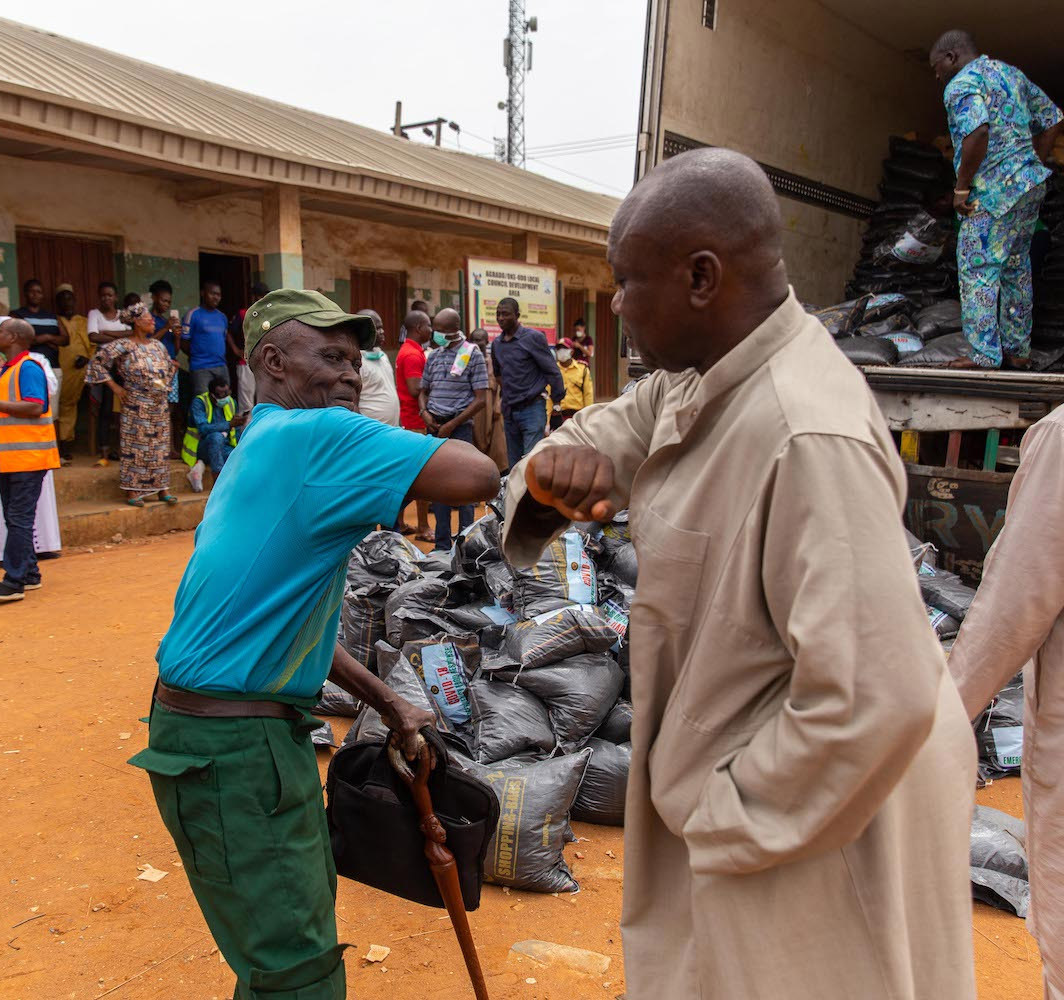 Policies imposed in rich countries to fight the coronavirus could have adverse effects in low-income nations—potentially endangering more lives than they save.

“It’s is unbelievably stupid to apply a modern model of an ageing wealthy population to a poor country with a young population with a miniscule of the fraction of Corona mortality that a typically first world country faces. This research is so obvious, yet to a world of ivory towered politicians and more affluent people it appears beyond comprehension. History has a rather delightful habit of celebrating the truth however uncomfortable that turns out to be. Scientific, economic and political stupidity will be in the limelight for decades to come and will form part of future think tanks about panic or if you insist pandemic models not to employ. Cinderella’s glass slippers do not fit everybody.” – Rubin Van Niekerk

In response to the coronavirus pandemic, varying levels of social distancing have been implemented around the world, including in China, Europe, and much of the United States. Hundreds of millions of people have accepted dramatic disruptions to their daily lives and substantial economic losses based on the reasoning that slowing the spread of the coronavirus can keep health care systems from becoming overwhelmed.

Epidemiological models make clear that the cost of not intervening in rich countries would be in the hundreds of thousands to millions dead, an outcome far worse than the deepest economic recession imaginable. In other words, social distancing interventions and aggressive suppression, even with their associated economic costs, are overwhelmingly justified in high-income societies.

But the logic of this response is built on the characteristics of the industrialized, relatively wealthy societies where the policy has emerged. Low- to middle-income countries, such as Bangladesh and Nigeria, are different and raise different questions, namely: Do the benefits of countrywide lockdowns also outweigh the costs in poor countries?

We see several reasons—including demographic composition, the source of people’s livelihoods, and institutional capacity—that suggest that the answer may be different than in the United States or Europe. To put it bluntly, imposing strict lockdowns in poor countries—where people often depend on daily hands-on labor to earn enough to feed their families—could lead to a comparable number of deaths from deprivation and preventable diseases.

Low-income countries (where per capita income is less than $1,000 per year) have smaller proportions of people over 65 (3 percent) than wealthy low-fertility nations (17.4 percent), according to the World Bank.

As a result, the Imperial College COVID-19 Response Team’s influential epidemiological model estimates that the unmitigated spread of the new coronavirus would kill 0.39 percent of Bangladesh’s population and 0.21 percent of the sub-Saharan African population; that’s less than half the 0.8 percent mortality rate estimated for the United States and other OECD countries.

This model accounts for country-specific demographics, differences in health care capacity, and infection rates, and it projects higher mortality in rich countries despite the comparatively poor quality of health systems in poorer nations. The model, however, does not account for the greater prevalence of chronic illnesses, respiratory conditions, pollution, and malnutrition in low-income countries, which could increase the fatality rates from coronavirus outbreaks. That is an important limitation of these comparative projections.

To calculate the comparative benefits of imposing social distancing guidelines in rich versus poor countries, we combined these estimates of country-specific costs of mortality with epidemiological predictions of mortality from the spread of the virus to generate estimates for a range of countries. In research that is currently under peer review, we found significant differences in the value of social distancing across countries.

An equally effective social distancing policy is predicted to reduce coronavirus-related mortality by 1.3 million people in the United States and 426,000 in Germany. Such a policy would only save 182,000 people in Pakistan and 102,000 in Nigeria. The question is how many lives would such a policy endanger in those poor countries.

The very large social distancing benefits estimated for the United States and Western Europe leave no room for debate about the public health value of widespread lockdowns and stay-at-home orders in those regions. That’s why calls from U.S. President Donald Trump and others to not make the cure worse than the disease make little sense in a country like the United States. The quantitative picture is a lot less clear in low- or middle-income countries, however. Those citizens also want to be safe from illness, but they don’t want to be unemployed, impoverished, or hungry.

The net gains in welfare from saving lives by imposing coronavirus suppression policies is even larger in high-income countries relative to low-income ones, because social distancing lowers disease risk by limiting people’s economic opportunities. According to our recent research, poorer people are naturally less willing to make major economic sacrifices. Indeed, they place relatively greater value on their livelihood concerns compared to concerns about contracting the coronavirus.Social distancing prevents the poor from working and generating an income.

Our estimates may even overstate the value of social distancing in poor countries, where such policies may also exact a heavier economic toll, especially on the poorest and most vulnerable. Workers in these countries are more likely to be employed doing hands-on work that cannot be conducted while social distancing. They are also likely to in the informal sector and rely on a daily cash wage—without access to a social safety net. In the short term, social distancing prevents them from working and generating an income; in the long term, this can lead to hunger, malnutrition, other non-coronavirus-related health problems, and death.

These are no longer merely hypothetical concerns. We started collecting systematic data last week from representative samples of individuals in rural Bangladesh and Nepal by conducting thousands of structured phone interviews, and we are learning that food insecurity and unemployment—not health and safety—are now the top concerns of the extreme poor in rural areas. Our research found that after Nepal’s lockdown was imposed, labor hours in rural areas have dropped 50 percent below even the limited number of labor hours that people are able to secure during the lean or so-called hungry season in the agricultural crop cycle.

Flattening the epidemiological curve of the coronavirus to buy time until a vaccine can be developed may prove counterproductive for poorer countries if it increases these other causes of mortality. Based on data from the Food and Agriculture Organization of the United Nations, we found that between 16 percent and 37 percent of households in lower-income countries are food insecure—people who already face hunger and stand to face increasingly dire circumstances if social distancing measures are imposed.

The social distancing and suppression interventions pioneered in Wuhan, China—and now in place throughout Europe and parts of the United States—rely on government support systems. Many workers throughout Europe still receive their salaries, and U.S. taxpayers will receive a stimulus check. By contrast, informal workers in developing countries do not always appear in government and bureaucratic records.

So even in the unlikely event that social insurance policies were implemented in these countries, it is not at all clear how quickly the estimated 50 to 80 percent of workers informally or self-employed in lower-income countries could be located, if at all, to deliver relief benefits to them. In addition, a lockdown may have counterproductive effects if it forces informal sector workers and migrants to reverse-migrate from densely populated urban areas and spread the disease to remote rural areas of poor countries.

Efforts by the Indian government to impose a lockdown already appear to have had significant negative consequences for the most vulnerable members of its population. Interviews with workers from the informal sector tell a story of impending poverty, evictions, and hunger, as their incomes and work opportunities have been curtailed. Migrant laborers in India’s largest cities, now without access to employment, are without food or shelter. Thousands are in the process of literally walking back to their homes, with deaths along the way already being reported. These mortality consequences cannot be ignored when devising public policy strategies to contain the coronavirus.

The social distancing policies implemented in European countries and the United States may well be applicable to other parts of the world. If widespread social distancing must be pursued, then enormous and innovative efforts must be made to get food, fuel, and cash into the hands of the people most at risk of hunger and deprivation. This is especially challenging in countries without well-developed social safety nets. It is important for governments, the private sector, humanitarian groups, mobile phone operators, and technology companies to experiment with innovative solutions such as sending cash transfers via mobile phones.

Because there is ample evidence that the economic costs of distancing—especially the burden on the poor—are a lot higher, a serious assessment is urgently required to determine what other measures could effectively save lives while minimizing losses in aggregate welfare.