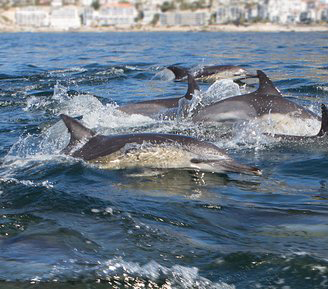 Western Cape, South Africa (25 April 2021) – A pod of Dolphins and Whales has been captured in footage starting to trend on social media.

The video was originally captured by Kade Tame but started making traction when it was shared by ‘Cape Town Etc‘, and since then, Good Things Guy has been tagged in various posts to share it too! According to the proudly Capetonian platform that celebrates all things Cape Town, the footage of the huge pod of Dolphins and Whales feeding was captured in Fish Hoek.

Fish Hoek is a coastal suburb at the eastern end of the Fish Hoek Valley on the False Bay side of the Cape Peninsula in the Western Cape, South Africa. Previously a separate municipality, Fish Hoek is now part of the City of Cape Town. As a coastal suburb of Cape Town, Fish Hoek is popular as a residence for commuters, retired people and holidaymakers alike. The traditional industries of ‘trek’ fishing and angling coexist with the leisure pursuits of surfing, sailing and sunbathing. There is an active lifeguard community that utilise the beach and bay for training.

“We saw the super-pod of dolphins and decided to follow them. As we were following them, the other half of the super-pod was spotted swimming in from Muizenberg beach,” Tame said.

“We then realised that it was the same pod and [they] were doing this for a reason (gathering fish). Before we knew it, there was white water everywhere and the most spectacular feeding began.”

Watch the incredible video below: