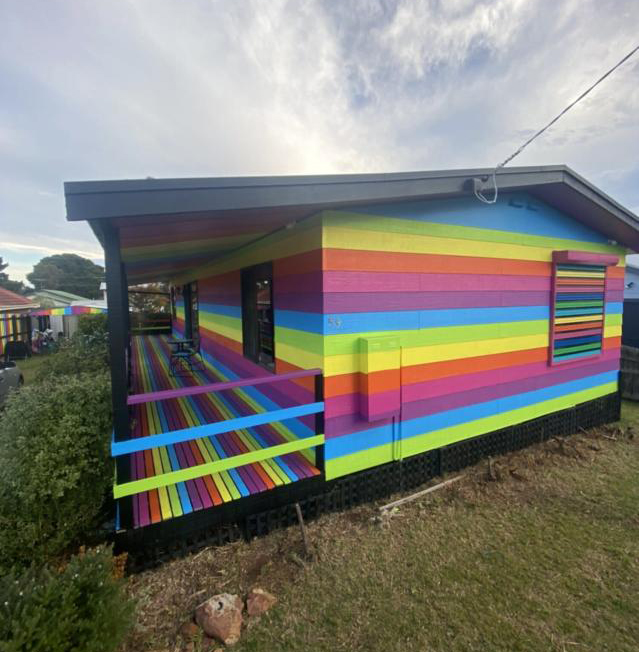 “The message we must take out of this situation and learn from this is to stand your ground, don’t let bullies tell you how you should be living your life,” Mykey O’Halloran wrote on Facebook

Mykey O’Halloran is known for creating vibrant, colorful hairstyles — so when he recently purchased a beige home, it was a no-brainer for him that he’d give it a makeover.

O’Halloran, 29, is the proud owner of Unicorn Manes, which has gone viral for creating extravagant hairdos inspired by things like cheeseburgers and tacos, according to the Washington Post.

To help spread his joy — and his pride at being a gay man — O’Halloran decided he’d paint his new beach house on Phillip Island, a small Australian community of about 7,000 people, in rainbow stripes, the Post reported.

But after he was reportedly threatened by a group of aggressive locals, O’Halloran was forced to lean on his community, who stepped up in a big way by turning out to help him paint the house of his dreams.

“I am a good person in society and I bring joy with rainbows, and no opinionated homophobic that’s opposed to the decision of how I want to live my life is going to take that away from me,” O’Halloran wrote on Facebook. “This house will be rainbow, and it will be rainbow with pride.” The trouble began on March 16, when O’Halloran said that five angry men banged on his door and confronted him about his plans to transform his home, which he bought in February, he told the Post.

“They’d heard about it through a conversation with the painter who was painting my kitchen. They told me, ‘Don’t do it. Paint your house and see what happens, because next time we meet, it won’t be so nice,'” he told the outlet.

The hair stylist said the men shouted homophobic slurs at him, and one even threatened to kill him if he did go ahead with his plans to paint his house (that man was later charged with unlawful assault and making threats to kill, according to the Post.)

“I felt a lot of fear in my body about anything that was potentially about to happen. I cried myself to sleep last night after feeling so invaded, violated, homophobically attacked and threatened in my very own home,” O’Halloran wrote on Facebook. Within a month, though, O’Halloran’s mood had lifted, and on April 18, more than 100 people showed up, paintbrushes in hand, to paint his home with blue, green, yellow, orange, purple and pink stripes.

“The positive response filled my heart with love and made me feel supported and not alone,” he told the Post. “People were dropping by to shake my hand, say hello and welcome me to the neighborhood.”

Linda Wilson, 47, was among those to show up to help, and said that she felt it was important to come and “show solidarity and support” for her new neighbor.

“There was a lot of openheartedness there on the day [the house was painted], and someone volunteered their time with a barbecue to feed all who attended,” Wilson, who facilitates an LGBTQ support group, told the Post.

Just as he transformed his house from beige to rainbow, O’Halloran was able to transform a painful situation into one brimming with joy, and wrote on Facebook that the incident had inspired a new lesson.

“The message we must take out of this situation and learn from this is to stand your ground, don’t let bullies tell you how you should be living your life,” he wrote. “It’s totally okay to be yourself in this world, everyone has the right to be who they are, and have freedom of expression.”