The crypto bubble that inflated Bitcoin’s value past $1 trillion and added billions to nonsense digital tokens overnight is bursting.

Bitcoin plunged almost 22% to $35,000, wiping out more than $500 billion in value from the coin’s peak market value. It has erased all the gains it clocked up following Tesla Inc.’s Feb. 8 announcement that it would use corporate cash to buy the asset and accept it as a form of payment for its vehicles. Ethereum, the second-biggest coin, sank more than 40%, while joke token Dogecoin lost 45%.

Bitcoin is now down more than 50% from its record of almost $65,000 set in April. Fueling the volatility is Tesla CEO Elon Musk, whose social-media utterances have whipsawed the crypto community. A statement from the People’s Bank of China on Tuesday reiterating that digital tokens can’t be used as a form of payment added to the selloff.

The selloff dominated market chatter on a day when equities also were tumbling and the Federal Reserve was set to release minutes from its latest meeting. #Cryptotrading was trending on Twitter, where critics and fans alike were in a tither over the rout. Critics had warned for weeks that the moves in crypto assets were unsustainable and that any sign of a selloff would lead to a rout.

“This is going to be the first ‘welcome to crypto’ day for a lot of new entrants,” said Stephane Ouellette, chief executive and co-founder of FRNT Financial. “The history of these assets has been littered with aggressive rallies and sickening selloffs.”

Chart-watchers pointed to key technical levels that have failed. 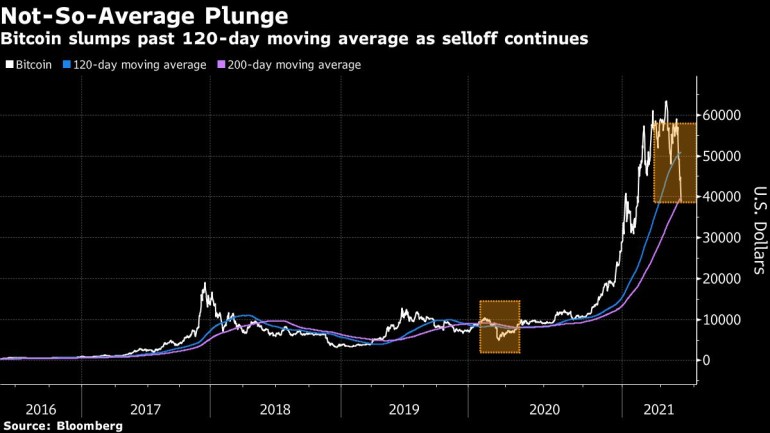 “From a technical standpoint, the indicators are flashing red,” said Ipek Ozkardeskaya, senior analyst at Swissquote in Gland, Switzerland. “The next important support level stands near $37,000, then the $30,000 mark. There is a chance that we see a pullback to these levels and even below, at least in the short run.”

With his often cryptic Twitter posts moving millions, the Tesla chief has become a Svengali-like character in the world of crypto. Bitcoin embarked on a multi-month rally following Tesla’s February announcement, soaring to its $64,870 peak, in large part due to the company’s embrace.

At the time, Tesla’s acceptance was hailed as a watershed moment for the coin, with many in the crypto world seeing it as yet another step in its evolution.

All that’s been wiped out after Musk sent investors into a tizzy following a mass of head-spinning tweets that started last week when he criticized Bitcoin’s energy use.

Tesla would suspend car purchases using the token, he announced, calling recent energy-consumption trends “insane.” Over the weekend, after insinuating his EV company might have sold its Bitcoin holdings, he sent out tweets clarifying that it hadn’t. All of which had traders scrambling.

“Realistically, it is not the first time Elon Musk’s tweets have been erratic and, frankly, wrong,” said Ulrik Lykke, executive director at crypto hedge fund ARK36. “The crypto markets are extremely emotionally driven and their participants are prone to overreacting to events they perceive as negative.”