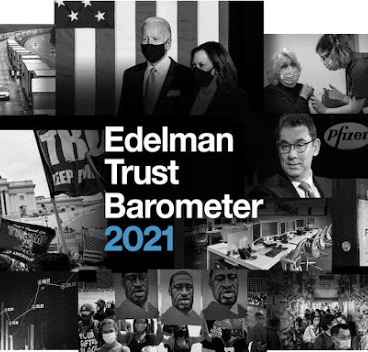 The 2021 Edelman Trust Barometer reveals that South Africans now trust business more than any other institution, and are looking to CEOs to solve societal challenges that have been exacerbated by the Covid-19 crisis.

“As the pandemic puts trust to the test, business has a clear mandate to help society navigate the Covid-19 storm and take the lead on driving positive change, with private sector organisations expected to fill the void left by government,” says Jordan Rittenberry, CEO of Edelman Africa.

Over the past year, trust in all four major institutions – business, NGOs, the media and government – has edged slightly higher as societal leaders take extraordinary steps to address the crisis, sometimes in collaboration with one another.

The 21st annual Edelman Trust Barometer, which measures trust as a function of competence and ethics, is based on a nationally representative survey conducted through October and November 2020.

According to the survey, business has overtaken NGOs as the most trusted institution in South Africa. This comes after many private organisations took unprecedented steps to protect their employees and local communities. Numerous firms put people before short-term profits as they provided customers with relief, donated towards pandemic response efforts, and launched community initiatives.

However, despite modest gains in their trust scores, the media and government are both still seen as distrusted, unethical and incompetent.

“The pandemic has brought on one of the most uncertain periods in modern history, and has further raised fears and increased the urgency to address foundational problems and deepening inequities in the country,” Rittenberry says. “In fact, job security has emerged as an even greater concern than contracting Covid-19.”

South Africans overwhelmingly believe that the crisis has made the country more unequal. More than half of the respondents say their workforce has been scaled back amid the pandemic. Now, people are increasingly looking to employers to offer upskilling and training opportunities.

“In this context, more than three in four South Africans believe that CEOs should fill the gap where government does not adequately address societal problems. And as many as 95% of respondents want CEOs to publicly speak out on a range of issues, including the impact of the pandemic.”

The most critical items on the agenda, according to the survey results, are the need to improve the country’s healthcare and education systems, and to address poverty.

Meanwhile, as is the case in other markets, trust in all information sources – search engines, traditional media, owned media and social media – has significantly declined as misinformation spreads. News organisations are seen as biased and most South Africans believe that journalists are intentionally trying to mislead them.

In line with a trend in which trust is becoming more localised, the most trusted source of information has become employer communications.

“This means that organisations have a responsibility to keep their employees informed by providing them with trustworthy information in the midst of a raging global ‘infodemic’, Rittenberry says.

The study ultimately shows that to overcome South Africa’s biggest challenges, and shore up trust, government, business and NGOs will need to work more closely together than ever before.