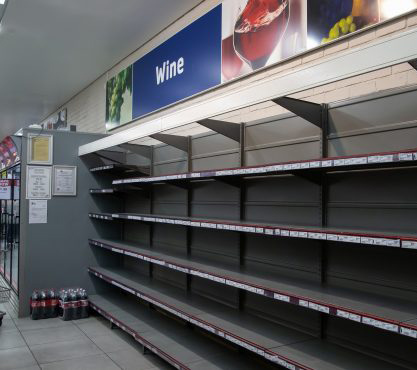 A report by Euromonitor International has documented the extraordinary growth of the illicit alcohol trade in 2020 as a direct consequence of the prohibition of alcohol sales.

The report indicated that illicit alcohol trade has grown at a compound annual growth rate (CAGR) of 17% since 2017 and now stands at 12% of the R177.2 billion total industry market value. For context, in volume terms illicit trade made up 1 in every 6,67 litres traded in 2017, and it has now escalated to 1 in every 4,54 litres traded.

Kurt Moore, CEO of SALBA, said, “This expansion of the illicit trade has had a devastating social impact on our citizens’ health and well-being, is stalling economic recovery and fuelling the engines of organised crime.”

Beer Association CEO Patricia Pillay said, “The report confirmed a clear correlation between the sales ban and the increase in the demand for illicit alcohol. The illicit trade market has almost doubled in the last three years and, in 2020, is now estimated to be worth R20.5 billion and comprises 22% of total alcohol consumption. The tragic indirect consequence of this has been the rise in illicit homebrew consumption-related deaths and an increase in criminal activities, which are now firmly entrenched.”

The growth in illicit trade indicates that the sales ban together with a lack of punitive measures and enforcement incentivised crime syndicates to ramp up smuggling and counterfeit operations to take advantage of the depressed legal market—with illicit products available even in high-end stores in Sandton—and further compounded the rise of illegal traders.

The illicit alcohol trade sales by volume had now overtaken the entire combined wine and cider sectors (665 431 hectolitres of alcohol equivalent vs 627 758 hectolitres of alcohol equivalent). Rico Basson, Managing Director of Vinpro, said, “Not only does this confirm what the alcohol industry has being communicating to government about the futility of banning legal sales but also confirms the World Health Organisation position that alcohol policy must take into account the national context. In our case, this is an existing rampant illicit market compounded by stringent regulations on the legal sale of alcohol, including alcohol excise taxes that are almost double what they were across all categories in 2012, combined with a weakening macro environment, where real disposable income contracted by 4.5% in 2020, and unemployment increasing to 29.2%, that have subsequently fuelled the market for cheap illicit products.”

The report also pointed to the disastrous economic impact of illicit trade. In 2020 SARS lost R11.3 billion due to the illicit alcohol trade. Moore pointed out that this was enough to pay for more than two million child support grants for a year or put additional 34 000 police on the streets.

“The loss to the fiscus has several repercussions,” said Moore. “It places an additional burden on the state’s ability to combat COVID-19, makes it difficult to enforce regulations, and seriously hampers attempts to stimulate the country’s economic recovery.”

Pillay said the South African alcohol industry and its stakeholders share the Government’s concern over the pandemic and will continue to support meaningful measures to flatten the curve and halt a possible third wave of infections.

“We stand by our commitment to being part of the president’s economic growth plan. The alcohol industry can—and does—play an important role as an engine of economic growth and job creation across the value chain,” Pillay added. “We can do this by operating within a well-regulated space. We do not support outright bans on alcohol sales which have tragic and disastrous consequences while alternative, effective and targeted interventions are available.”

The sector has continually sought ways of collaborating with the Government to re-examine alternatives to prohibition and find viable and better alternatives that address alcohol misuse while maintaining the livelihoods of a significant number of people whose jobs and access to income are dependent on the industry.

The alcohol industry has provided a hotline for traders and customers to report any breach of the regulations. The industry urges consumers to call the Consumer Goods Council hotline on 0800 014 856 to report any violation of the regulations. The tip-offs will be reported to the South African Police Service who will investigate, and individuals who are found to be breaking the law will be prosecuted. The manufacturers are promoting the hotline number on their websites and platforms and enhancing their responsible-messaging campaigns.