G7 leaders to save world from the crises they caused 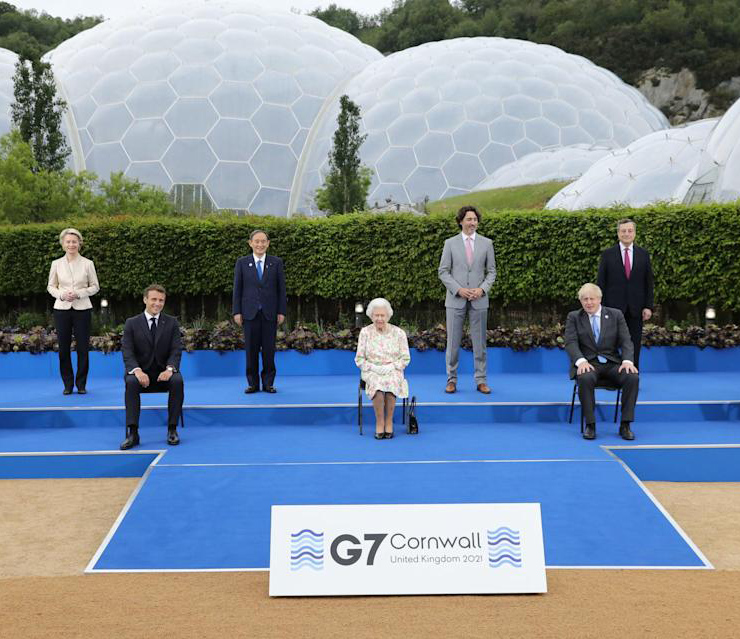 The leaders of the elitist Group of Seven (G7) countries descended upon the usually quiet little village of Carbis Bay, Cornwall, to save the world. Here’s what they were up to.

The G7 is a self-selected group of the world’s largest so-called advanced economies. The ‘advanced’ clause allows them to exclude China, which has the second-largest economy in the world, and India, which has the fifth-largest economy in the world, on the grounds that they just have too many poor people. Also excluded is Russia, which once was a member of the G8 but got kicked out of the liberal democracy club for annexing the Crimea without permission.

What’s left is the United States, Japan, Germany, the United Kingdom, France, Italy and Canada. The group accounts for 10% of the world’s population, but 60% of its net wealth. Its leaders meet at the G7 Summit every year to collude on how they will enhance their prestige and save the world from the menace du jour.

Last weekend, it was held in Carbis Bay, an idyllic village in Cornwall on the shores of the Celtic Sea.

There, they blamed Covid-19 for the economic carnage of 2020, without for a moment stopping to consider how much of the damage was done not by a novel coronavirus, but by an entirely novel response: shutting down the world’s economy and locking everyone in their homes.

They promised to ‘create the appropriate frameworks to strengthen our collective defences against threats to global health’.

These are the last people that ought to be in charge of pandemic preparedness. Despite decades of warnings, they were caught hopelessly flat-footed by Covid-19. Thankfully, though serious, it proved to be nowhere near as bad as it could have been.

These leaders, most of whom oversee state-run healthcare systems that tightly ration medical services and are entirely incapable of coping with changes in demand, promptly panicked and broke all the established pandemic response guidelines. Instead, our supposedly liberal and democratic overlords followed the lead of one of the most autocratic nations on Earth by imposing draconian lockdown rules which have had dubious benefits and catastrophic costs.

Now the same people who thought lockdown was appropriate want to come up with new ‘appropriate frameworks’? Save us!

The same people that drove the world’s economy off a cliff also promised, using many grandiose adjectives, to ‘build back better’, as if the economy was an old house that needed to be demolished to make way for a grand new edifice.

That new edifice ought to be grand indeed, since they’re spending $12 trillion on it, or almost 15% of the world’s entire GDP, picked straight out of your and my pockets.

This money will ‘promote growth into the future, with plans that create jobs, invest in infrastructure, drive innovation, support people, and level up so that no place or person, irrespective of age, ethnicity or gender is left behind’.

‘Level up’. It’s like they’re playing a computer game and have just respawned as if last year’s massive economic contraction never happened, and they can start over with a clean slate.

Helpfully, when a government prints money and uses it to construct something entirely useless, the full cost of that project is added to the GDP. It doesn’t have to have value. It doesn’t have to be productive. All it has to do is artificially inflate that magical GDP number, and they’ll say, ‘Job’s done, and it’s a good one.’

This grave defect of GDP as a measure of how the economy is doing really does let them manipulate global growth as if they were playing a computer game. They have the cheat codes.

The biggest cheat code of them all is a radical Marxist fringe theory I call Magic Money Theory (MMT). Its core thesis is that an issuer of currency faces no financial constraints, and can never run out of money, since it can simply print whatever is needed to meet payment and repayment obligations.

To justify this rather startling position, they simply deny the most obvious objection: that uncontrolled inflation of the money supply will lead to price inflation. There is no relationship between rising monetary supply and rising in the general price level, their textbook says. It’s a thoroughly deluded idea. (See A Skeptic’s Guide to Modern Monetary Theory by Greg Mankiw)

They hear Adam Smith saying, ‘What is prudence in the conduct of every private family can scarce be folly in that of a great kingdom’, and gleefully retort, ‘OK Boomer. Hold my beer.’

So, the promise is to crank the printers to conjure dollars, euros, pounds, yen and maple leaves out of nothing, and use them as band-aids over the bleeding wounds they inflicted upon our economies.

Then they posed for the formal photograph, looking all Messianic and munificent, as if the world owes them gratitude and adulation.

Look at those heroes, saving us from the crises they visited upon us! Of course the virtue-signalling about social distancing didn’t last long. When they thought the cameras weren’t watching, they had a beach barbecue at which only the staff wore masks and nobody kept any distance.

When they met Queen Elizabeth II for tea, there was the formal photograph, with everyone at a distance even though it was outdoors:

And then there was the casual interaction, at what looks like a science-fiction fantasy a creative teenager might have sketched 40 years ago while not paying attention in history class. The venue, The Eden Project, maintains an entire rainforest ecosystem under huge glass bubbles.

Dressed up as an ‘educational charity’ that drills fear of eco-catastrophe and resentment of their parents into school children, it offers a range of cultured entertainments for the elites to make them feel better about themselves.

Here, nobody thought to keep a respectable distance from the improbably geriatric queen or from each other:Rules for thee, but not for me. To butcher the bard: all the world’s a stage, and all the politicians merely players, pretending to stand shoulder to shoulder with the plebs they grind into the dust under their heels.

According to Reuters, the queen asked: ‘Are you supposed to be looking as if you’re enjoying yourselves?’

The question provoked only laughter, and her prime minister replied: ‘Yes, we have been enjoying ourselves in spite of appearances.’

The poor, hard-working wretches, sweating away at the mediocre Carbis Bay Estate, almost as if they themselves got laid off and can’t pay their rent or feed their children because of lockdown.

Environmentalism being the catch-all excuse for grand ego-projects, the G7 reiterated their usual platitudes about climate change, saying nothing new and nothing concrete.

For the host, Britain, showing off its green credentials was a priority, which explains the outing to the fake rainforest. After all, it is also hosting yet another super-luxury climate jamboree in Glasgow later this year.

Now they might have told everyone to arrive in no more than one aeroplane, and held the meeting at a top business hotel near Heathrow in London. That would be convenient, economical and eco-friendly.

But no, not Britain. They held the affair in a remote seaside resort 500km away from London.

You’d think eco-conscious leaders would find fairly eco-conscious modes of transport to their destination. Not everyone is in the privileged position to borrow a racing yacht from Monaco royalty and a Tesla from Elon Musk, but perhaps they could, say, rent a small fleet of buses to ferry the worthies and their entourages on the six-hour journey from London.

But no, not America.

Once the glorious president of the best country in the world – the famous slayer of the Orange Monster, no less! – arrives in one of his luxurious but fuel-thirsty converted Boeing 747-200s, we couldn’t have him being dependent on dodgy local transport. He’ll need at least one helicopter to get around, and probably more.

Other aircraft arriving from America included a squadron of Bell-Boeing V-22 Osprey tilt-rotor VTOL craft, because they just look awesome, and a few Boeing CH-47 Chinook heavy-lift twin-rotor helicopters, because who doesn’t take the heaviest lifting capability in the Western world to a weekend in a small seaside town?

For days, these aircraft burnt off excess fuel the world didn’t need to practise difficult manoeuvres like landing and taking off in various scenic locations, all of which, of course, are part of the environment the bigwigs were there to save.

The village itself, looking mighty important with two warships in the bay, was entirely fenced off with a three-metre-tall ring of electrified black steel. The police had been crawling all over Carbis Bay for months, checking drains for Guy Fawkes and installing CCTV cameras and lights to keep the citizens under surveillance. The entire town was locked down, and residents had to carry proof of address papers and produce them on demand.

Military vehicles everywhere. Black electric fences. Citizens carrying papers and being filmed wherever they go. Leaders who make ostentatious performative gestures of solidarity for the cameras, only to dispense with them as soon as they become too burdensome.

This is the rarefied world in which G7 leaders plot to ‘rebuild better’. I couldn’t think of a more hypocritical, elitist bunch of people for the job.

To butcher another great poet, Alfred, Lord Tennyson: Ours not to make reply, ours not to reason why, ours but to obey or die.

PrevPreviousDISCOVERING GYM AT AN OLDER AGE
NextNon-binary athlete competing in new category: ‘I was seen’Next