10 of the most unapologetically queer music videos 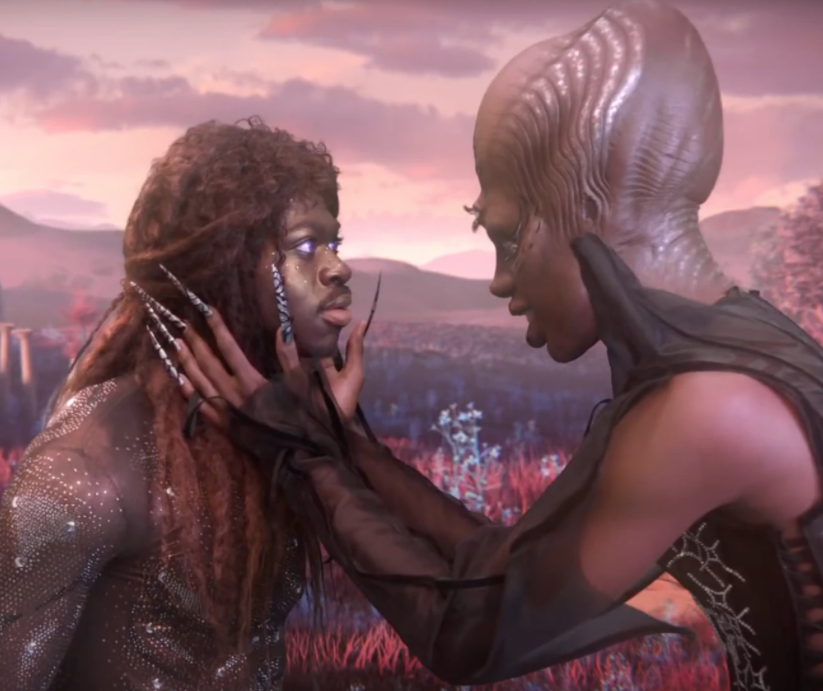 From King Princess to Lady Gaga, Rina Sawayama to Lil Nas X – these icons are paving the way with representation of queerness in the mainstream.

There’s no doubt that Lil Nas X’s latest video is groundbreaking. When it debuted last Friday conservatives found it inappropriate and clergy saw it as sacrilege whilst the queer community ate it up. In an open letter to his younger self posted on instagram Lil Nas X said: “I know we promised to never be “that” type of gay person. I know we promised to die with the secret, but this will open doors for many other queer people to simply exist.”

The truth is that for queer people it has been historically hard to find examples of ourselves within media, including within pop music. Even those who do openly speak out about the LGBTQ+ community have found their queerness watered down on screen to make them more sellable. It’s why for many generations now, LGBTQ+ people often relied on the unapologetic sexuality of female pop stars to live out their queerness. Think of Britney donning an array of wigs and seductive costumes to entrap her cheating boyfriend in “Womaniser”; Mariah frolicking on the bed to get the attention of her geeky lover in “Touch My Body” and Rihanna celebrating kink in “S&M”. We inserted ourselves into these heterosexual fantasies and found solace there, which is why these icons often hold a special place in our hearts.

There has, however, been a handful of LGBTQ+ icons through the years who have brazenly showcased queerness and refused to tone themselves down. Here are 10 music videos — from David Bowie to Miley Cyrus and Lil Nas X —that are unapologetic in their diverse representation of the queer identity.

With a healthy dose of rock ‘n’ roll, horror and Miley’s infamous tongue, “Prisoner” sees Miley Cyrus and Dua Lipa making out in the back of a van in this incredibly sexy music video. Miley has a strong queer following that have grown up alongside her, while Dua is the popstar du jour (having just won the Grammy for best pop vocal album), so there’s no doubt that fans will be happy to see their faves being so outrageously open with their sexuality.

David Bowie was showcasing queerness at the birth of pop music. In the video for “Boys Keep Swinging” in 1979, the artist appears as both his skinny-suited, mullet-haired self and three dragged up Bowie back-up singers. In a Saturday Night Live performance of the song at the time, NBC tried to censor the overtly homosexual lyrics but failed to notice that the CGI puppet David’s head was super imposed onto had the visible outline of a swinging penis every time it moved. Pretty iconic tbh.

The break-up anthem has been the staple of girl groups for some time now. From Beyoncé and Michelle comforting Kelly (probs because her man didn’t reply to that Excel text message) in “Girl”, to Little Mix throwing a sleepover to raise Leigh-Anne’s spirits in “Hair”. It’s rare to find male singers creating videos that showcase them empowering one another and lifting each other up during hard times. Enter MNEK and Olly Alexander, who in the music video for “Valentino”, get over their stood up dates by messing up the rose petal-covered bed, opening the champagne and getting dolled up for a night out. A sweet visual representation of the power of queer friendships if we ever saw one.

The ‘Rising Star’ Brit Award-nominated singer’s music videos often have a campy self-expression — styled around the pop icons of 90s and 00s such as Xtina and Avril Lavigne — whilst offering personal takes on real world issues such as racial microaggressions. In the film-noir music video for the song “Bad Friend”, Rina gets into male drag to damningly explore toxic masculinity, the lack of communication or support between men and the unhealthy ways in which their pain is dealt with.

With a groundbreakingly subversive song that lyrically speaks to bottoming and queer romance; this video sees Troye look like various oil paintings in an art gallery: donning ostrich feathers, scarf corsets, cowboy boots and sultry red lipstick. The overarching metaphor reaches its peak with imagery of flowers opening up and coming to life.

For many LGBTQ+ people, Mother Monster was the outlet in which we expressed our queerness. Although this entire list could be populated with Lady Gaga’s videography, the music video for “Alejandro” was truly queer, blending masculinity, catholicism, BDSM and homoeroticism. Expect: marching dancers in high-rise skin-tight shorts and army boots, Gaga dragging beds with models tied to them and some impressive deep-throating of rosary beads. The video might have provoked the ire of the Catholic church (and accusations of copying Madonna) but the adoration of the queer community was stronger than ever as, once again, Gaga unapologetically let her freak flag fly.

Playing on queer campy-horror classics such as Rocky Horror Picture Show, Clue and Beetlejuice, “Flamboyant” does exactly what it says on the tin. Dorian shines in a glittery gold piano jacket, frilly lacy shirts and visibly suspended socks as they live out their fantasy and become a vision of unashamed self-expression.

The genderqueer gay icon King Princess has expressed their queerness in videos such as “Talia”, showcasing loving, romantic, sexy nights with a blow-up doll, and “1950”, an intimate portrait of a queer relationship. In the latter, scenes of a couple taking polaroids in the sun, filling their hair with flowers and dancing around an empty hall are interspersed with shots of King Princess with a drawn on moustache singing into a mic in between cigarette tokes. It feels somewhat like an homage to a certain aforementioned David Bowie music video.

And of course, we can’t forget the latest offering from Lil Nas X. The horny video is already making waves and offending conservatives, so what more could you ask for? In one particular scene Lil Nas X pole dances his way to hell before giving Satan a lap dance and then killing him, taking the top spot as king of the underworld. Sabrina Spellman found quaking. The ownership and brazen projection of his queer sexuality is something we haven’t really seen on this level in a mainstream pop music video before. Combining the sex appeal of Britney with the queerness of Bowie, then styling it with the blasphemy of Gaga; Lil Nas X is truly changing the game for queer representation within pop music videos. We love to see it.