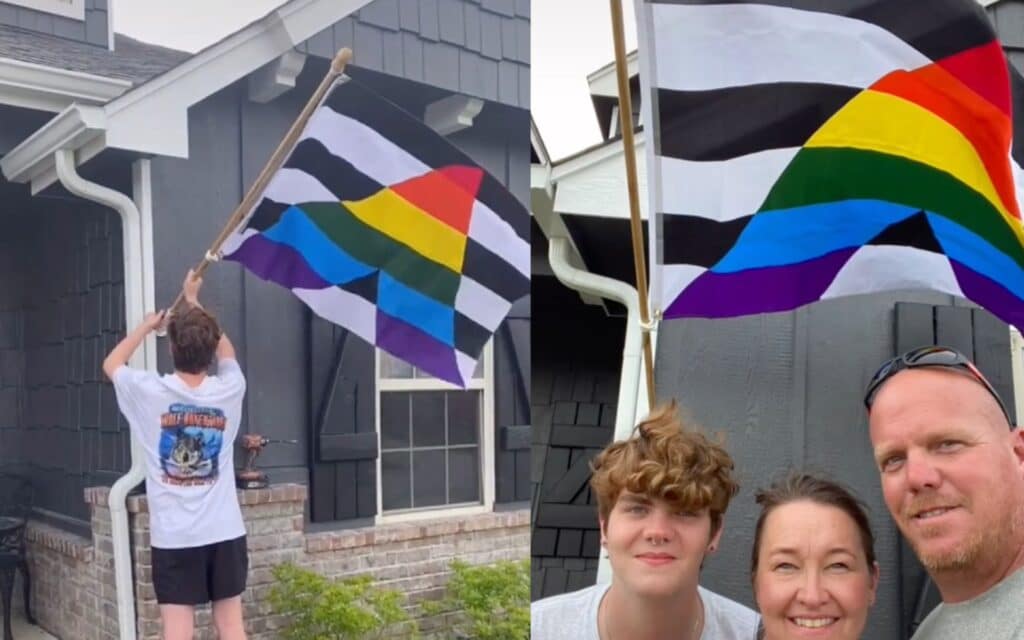 A father from Oklahoma has shown his support for his gay son in the best possible way – by putting up the ally Pride flag outside their home.

John Wyatt, 45, shared a video of the incredible moment on TikTok with Lady Gaga’s LGBT+ anthem “Born This Way” playing in the background.

In the clip, Wyatt and his son Caden, 15, can be seen erecting the ally Pride flag outside their home, with the proud father telling his followers: “We are fixin’ to shock Oklahoma.”

Wyatt shared the clip on TikTok earlier this month to mark Pride Month and it quickly went viral, racking up more than 450,000 likes and 19,000 comments.

Speaking to Buzzfeed News, Caden said he knows he is “really lucky to have such supportive parents, because I know a lot of other people aren’t as lucky as me”.

The family live in a conservative community just outside Tulsa, Oklahoma, where Trump supporters and “Blue Lives Matter” fanatics fly their flags throughout the year.

Sadly, nobody in their area flies Pride flags outside their home – so John Wyatt decided to rectify that.

The heartfelt gesture is even more meaningful because John was not always an LGBT+ ally. In fact, he told Buzzfeed that he used to be conservative and very religious – but all that changed when he and his wife began to wonder if their son might be a member of the LGBT+ community.

“That’s when we really started embracing [the community], because we knew our son was gay, and at any time he could come out,” Wyatt said.

“And he needed to see that we were going to be able to support him and be there for him.”

Wyatt also confessed that he was worried neighbours might vandalise the flag – but so far, nobody has reacted to it at all.

“We’re letting people know it’s a safe place. I’m not trying to cause any controversy in the neighbourhood, but maybe there’s some person out there who will see that flag and smile and feel safe,” he said.

Wyatt has won the hearts of LGBT+ people across the world for the heartfelt gesture.

“Good job dad, this actually made me cry lol,” one TikTok user commented.

Another wrote: “So I’m claiming you as my dad. Cause my dad said he never wanted me to show off my flag.”

One emotional TikTok user added: “I cried. You guys are an incredibly supportive family. Your son is lucky. God bless and Happy Pride!”