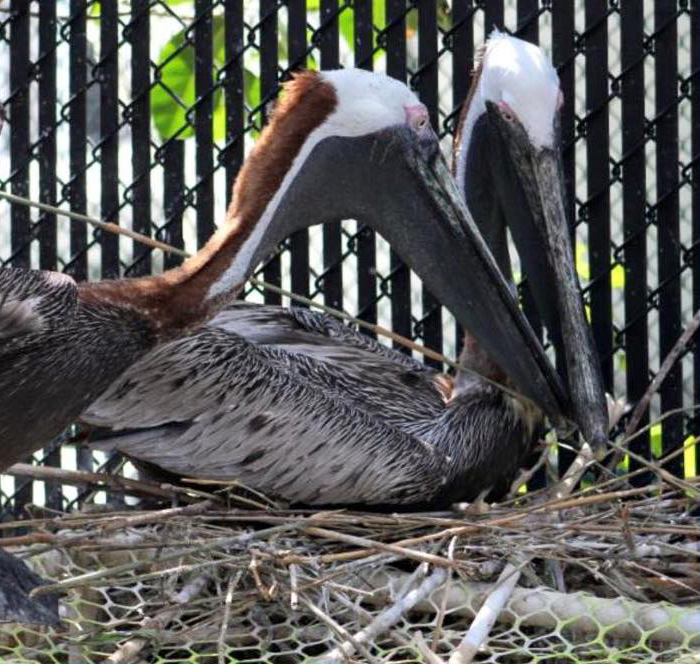 A gay pelican couple at the Pelican Harbor Seabird Station in Miami, Florida, are celebrating their 18th anniversary this year.

Staff at the wildlife rehab centre, which treated thousands of injured or orphaned animals every year, first realised brown pelicans Pepe and Enrique had fallen in love when they started building a nest together 18 years ago.

Most brown pelicans are “seasonally monogamous”, meaning they are loyal to a different mate each year, and same-sex couples are very rare.

But each year when mating season rolls around, Pepe and Enrique choose each other.

Hannah McDougall, director of communications at Pelican Harbor, told LGBTQ Nation that one of the birds will kick off the courtship each year by presenting the other with a stick as a sign of affection.

The couple are among the few permanent residents at the wildlife rehab centre, which usually releases patients back into the wild, as they both have have injured wings which never healed properly.

“It’s a condition that we call ‘angel wing’, because rather than sitting flush against their body, their wing will stick out kind of like an angel’s wing,” McDougall said.

Although the gay pelican couple are usually given a fake egg by staff to place in the nest they build every year, after the Deepwater Horizon oil spill in 2010 the gay pelicans acted as foster dads to chicks orphaned in the disaster.

McDougall said: “They are our beautiful special boys.

“They’ve been building a nest together. They take turns incubating a fake egg that we give them.

“They’re in love, they’re inseparable and always by each other’s side.”

With brown pelicans living for around 30 years in captivity, it appears that Enrique and Pepe have chosen to stay together for life.

The pair are available for ceremonial adoption via the Pelican Harbor website, allowing fans of the gay pelican couple to contribute to their care, and for anyone wondering how their nest-building is going, they are also the stars of the centre’s 24/7 livestreamed “Pelicam”.