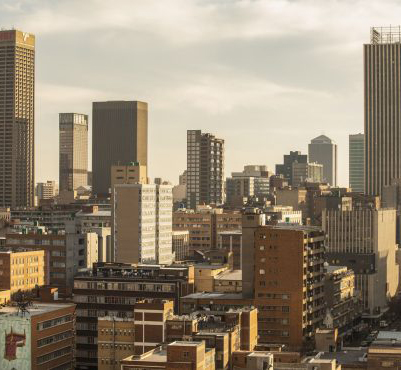 These charts show why the interest rate-setting panel’s next move may be to tighten policy.

Born out of a banking crisis caused by unusual financial and monetary conditions during World War I, the South African Reserve Bank opened its doors on June 30, 1921. Singled out by ratings companies and investors as a pillar of institutional strength in a country where graft and mismanagement of resources hollowed out government organs over the past decade, the central bank fiercely guards its independence and has diligently worked to rein in inflation.

Buffers built by the bank, in part through lowering inflation expectations, allowed it to bring in unprecedented measures to offset damage caused by Covid-19. Now, with Africa’s most-industrialised economy on track to recover from its biggest contraction in a century, its monetary policy committee is preparing to raise borrowing costs.

These charts show why the interest rate-setting panel’s next move may be to tighten policy: 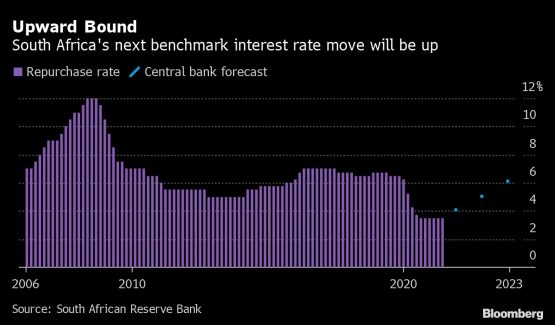 Policy makers cut the key interest rate by three percentage points in 2020, of which 275 basis points of easing was in response to the impact of the virus on the economy, taking it to a record low 3.5%. The central bank’s quarterly projection model, which the MPC uses as a guide, indicates two rate increases this year of 25 basis points each and a key rate of 6.11% in 2023.

Even so, the policy stance will remain accommodative, according to Deputy Governor Kuben Naidoo.

“There is no contradiction between hiking rates and having accommodative monetary policy,” Naidoo said in an interview. “At the moment, rates on a forward-looking basis are negative and quite highly negative — even if we raised it by 50 basis points, they remain negative. We can’t keep interest rates at 3.5% forever.” The timing of the first increase remains uncertain, even after inflation breached the midpoint of the central bank’s target range in May. That’s as its model predicts consumer price growth will top 4.5% — where the MPC prefers to anchor expectations — in the second and fourth quarters of the year.

Governor Lesetja Kganyago has said the MPC will only step in to bring inflation under control if it sees a sustained deviation from the midpoint. Forward-rate agreements used to speculate on borrowing costs suggest traders see the key interest rate higher by the fourth quarter, while nine of the 13 economists in a Bloomberg survey only expect hikes from the first quarter of 2022.

While markets are speculating about scope to lower the central bank’s 3%-6% inflation-target range, no talks about changes are currently taking place, Naidoo said. The target, first announced 25 years ago, is set by the minister of finance in consultation with the central bank. Raising borrowing costs too soon will likely draw criticism from politicians and labour unions, who’ve said the Reserve Bank should be doing more to support the economy and reduce unemployment. It could also re-ignite a debate about nationalizing the SARB that could put the country’s reserves worth more than $50 billion at risk.

While shares in the central bank that only trade over the counter are worth about R29 million ($2 million), some shareholders have argued its assets belong to them and they should be compensated for that if the government takes it over. Such a move — recommended by the ruling African National Congress — could ultimately affect the bank’s mandate and credibility.

“There has never been a hint of scandal in the South African Reserve Bank on almost anything and actually, in the South African context, that in itself is a positive,” Naidoo said. “Monetary policy works and central banking works in part because of public credibility and trust.”