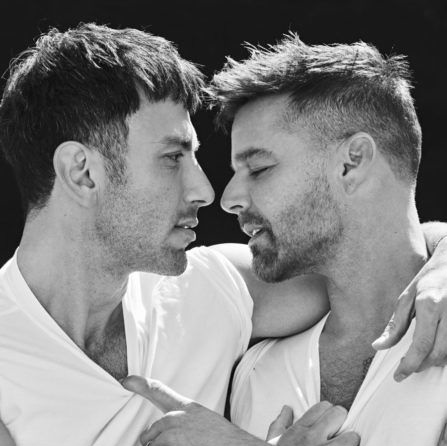 Most people on social media were complimentary about the pics, which showed the couple hugging and embracing.

However, clearly, not everyone felt that way. On Monday, Martin took to social media to say he noticed the number of followers he had significantly dropped after he posted the images. He’d also received several derogatory comments.

On his social media, he said he wasn’t bothered by not having as many followers, but was more disturbed by what that represented.

“Today I want to speak to you from my most vulnerable side…” he began, alongside photos of him with manicured nail extensions. The message was translated from Spanish to English on Facebook.

“A week ago, I uploaded some photos with my husband for a special edition of @capogether4024 magazine. For both of us it was a wonderful experience and a way to celebrate our pride.

“What I didn’t expect, especially after all the work that has been done for so many years, is that a large number of people decided to unfollow or comment derogately.

“Of course, it’s not the number of followers I’m concerned about, it’s the message behind your decision that has caused me the same feeling I had years ago before sharing publicly about my sexual orientation. That same fear that paralyzed me, tormented me and wouldn’t let me be.

“Today I see the pictures and what that I feel is a full peace of being able to celebrate my family as they deserve, all the high. To celebrate me as I am no matter what they will say.

“And that fear I just spoke of, no longer paralyzes me, on the contrary, gives me much more strength and pushes me to continue to work for the well-being of millions of people suffering every day because of the lack of acceptance.

“The most I wish in this life is that we can all feel free, proud of ourselves, happy, that we are loved, respected and accepted.

“May we express ourselves how we are born without retaliation or being punished.

“It’s not fair to continue losing valuable lives due to prejudice and lack of education.

“To all those who feel lost or not valued for being who they are and want to be, are not alone, there is a great community waiting for you with open arms. They are worth a lot, don’t forget it please.”

On Instagram, the message has been liked over 1.6million times. Among those to share or comment was singer Camila Cabello, who said on her Instagram stories, “You are inspiration, love and courage, I love you, friend!!”

Martin came out in 2010. He met Jwan, an artist, in 2016. Martin had already become a father to twins, Matteo and Valentino, in 2008. The men announced they were married in January 2018, and since that time they have welcomed daughter Lucía ( December 2018) and son Renn (October 2019) into the world.