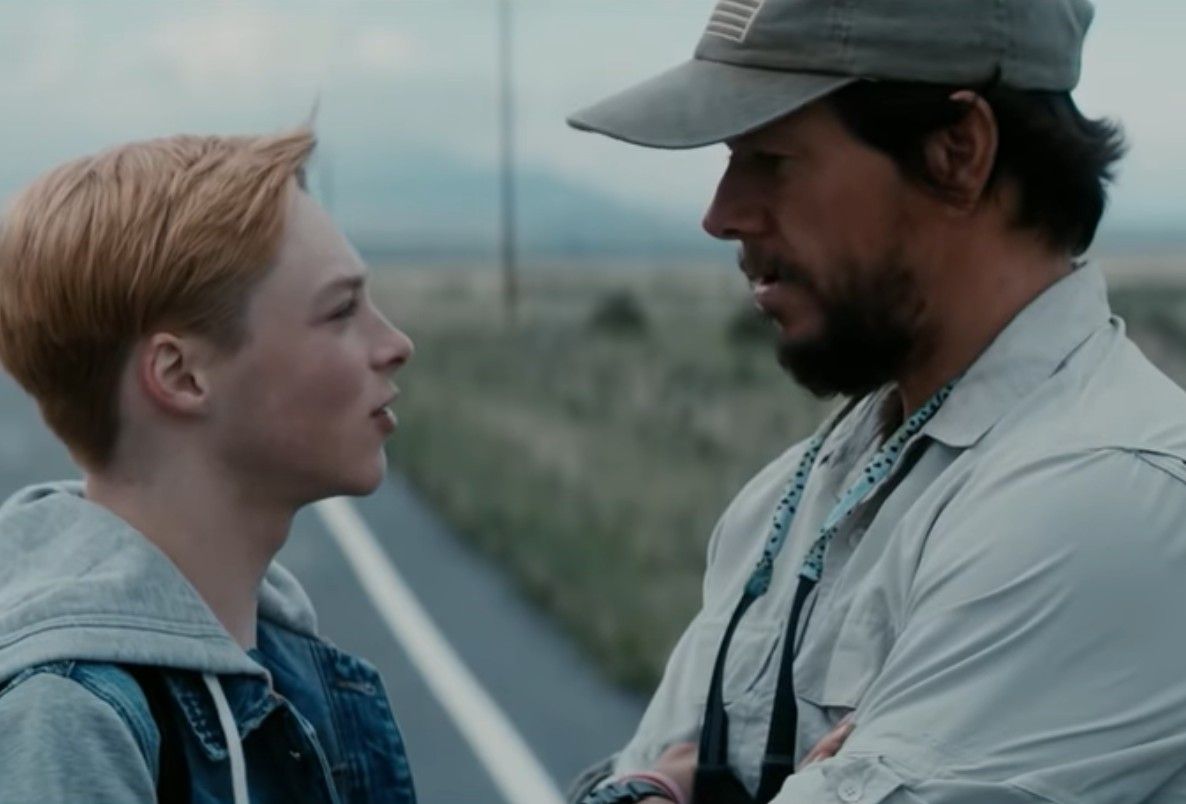 The true story of a small town, working-class father who embarks on a solo walk across the U.S. to crusade against bullying after his son is tormented in high school for being gay.

Mark Wahlberg portrays real-life Joe Bell, who in 2013 trekked across America on foot (strikingly captured with wide-angle shots emphasizing distance traveled) to preach about the harms of bullying, specifically homophobia and bigotry. Starting in small hometown Oregon with a destination of New York (for reasons that become clear as Joe Bell goes on), we first see Joe giving a lecture at a high school about the pain and side effects such torment can inflict. He then proceeds to end his speech on a note that acceptance all begins at home with parents allowing the children to express their identity and be themselves. Once back on the road, he is confronted by his son Jadin (a powerful Reid Miller, unfortunately, somewhat wasted as this is mostly a flimsy character study of Joe). The latter reminds his father that he didn’t exactly practice what he just touted. Joe begs to differ, and then director Reinaldo Marcus Green (Monsters and Men) takes us back to a flashback nine months ago.

Jadin comes out as gay to his mother Lola (the far more accepting and tender parental figure, played by Connie Britton) and father Joe, who claims to be okay with his son’s sexuality but clearly internalizes homophobia and shows great concern for his reputation and what other families will think. His solution for Jadin is to put up his fists and start fighting, pushing outdated manliness on his teenage boy without bothering to dig deeper into what that hazing and harassment at school is like. Mostly, he’s just embarrassed by the boy practicing cheerleading out in the front yard with his best friend Marcie (Morgan Lily), insisting they take it to the backyard away from judgmental eyes, all while being assured by friends that homosexuality is merely a phase.

Throughout the first 45 minutes or so, the direction and script (written by Diana Ossana and Larry McMurtry) strike a fair balance between studying the internal struggle inside Joe Bell and the horrors Jadin faces daily (which are not sanitized and uncomfortable to watch). Switching back and forth nine months apart allows both Joe Bell and audiences alike to see not necessarily the hypocrisy but the flaws in his thinking and reasons for his walk across America. Joe seems to think that change can be made by handing bigots a flyer on the effects of bigotry, much like global corporations think showing sincere activist alliance amounts to updating a social media avatar or hollow gestures that leave no impactful impression. As more details about the story and his past come to light (there’s a certain event that seems to have only made his toxic and borderline verbally abusive behavior only worse, further painting a portrait of a complicated person), the good-intentioned purpose of his quest begins to feel misguided. It’s as if Joe Bell is hiding from the truth, his own actions, and the part he played in allowing the abuse to go on. In particular, a scene inside a drag bar concludes with an emotional revelation that stings, changing the course of the narrative for better and worse.

This is where the narrative decides to make Joe Bell the primary focus, triggering a series of sentimental sequences that, while terrifically acted by Mark Wahlberg with respect and emotion ranking among some of his best work to date, can’t escape that it’s the wrong trajectory. The life of Jadin, which starts as half of the narrative, practically fades away (until it’s time for one critical scene) and leaves nowhere intriguing for the rest of it to go aside from redemption. The self-reflection is largely gone, the insight into the life of Jadin disappears, there’s a lack of scenes between the two of them, and Joe Bell somehow loses complexity as a person. It’s also odd that a film attempting to explore manliness in different forms that has a boy still showing interest in football (even if it’s through cheerleading and trying to date a closeted running back) doesn’t do much of anything with that juxtaposition. There are some more speeches and some interactions with a sheriff (Gary Sinise) empathizing with Joe’s journey due to having a gay son himself, but not much of it is engaging. Thankfully, the film also doesn’t step too far into misery porn.

Joe Bell is still relatively watchable even if the story has honed in on the wrong person, but then the ending comes. First of all, the twist (which is admittedly well executed even if most viewers will see it coming from miles away, quite literally in this case) already questionably recontextualizes certain scenes. However, it’s the final scene between Joe and Jadin Bell that is such ill-advised garbage, whatever well-meaning ideas the film started out with have now twisted into offensively feel-good redemption and forgiveness, again, coming from the wrong characters.

There’s a line where someone tells Joe he is mistakenly making the walk for Jadin about him; the direction from Reinaldo Marcus Green makes the same mistake. It also wouldn’t even be so wrongheaded if anyone bothered to shy away from melodrama and clichés while maintaining some level of dignity to the writing (especially during the last 10 minutes). There’s nothing wrong with wanting to study Joe Bell’s confused and conflicted state of mind, but the script also comes up short there during the second half. It’s a shame that in what is debatably Mark Wahlberg’s career-best performance, the execution of Joe Bell is so erroneous.