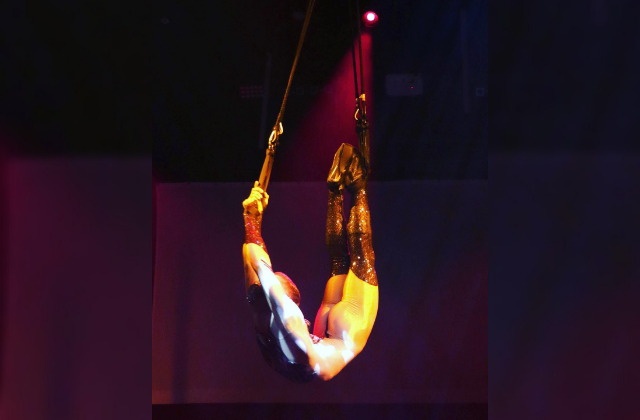 Sensually aerobatic and sexually athletic, the performers of AirOtic amaze audiences. The show is an intimate celebration of the body and companionship developed by Stephane Haffner and his husband Kyle Kier.

“It has lots of LGBTQAI+ tendencies,” Kier said. “It’s a show for everyone in the community. It’s very inclusive.”

Kier and Haffner developed the show a few years ago and have run versions of it in places including Provincetown and on Atlantis cruises.

“The costumes, the choreography, the music is all very tongue in cheek, it’s super camp but also with a sensual undertone. It’s like 50 Shades of Grey meets Cirque du Soleil.” Kier said. “Everything is done with class. It’s all about sensuality, physique, and the circus art that is behind it. Like the Crazy Horse in Paris, France. That kind of style with a modern twist.”

Kier said part of the modern twist is the music. “Our music generally is top pop covers, acoustic versions more dark and heavy and a lot of ups and downs in the show. There’s a sexy side but also a lovey-dovey romantic side to it as well.”

While the show is often compared to Cirque du Soleil productions, this show features a small cast allowing audiences to make a more personal connection with the performers.