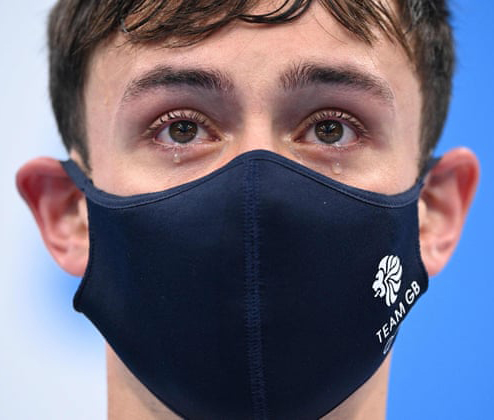 All the hope, disappointment, despair and joy the British diver had endured these past 13 years were cleansed with Tokyo gold.

Two teardrops stood still for a moment and glistened on Tom Daley’s skin soon after he and Matty Lee had draped gold medals around each other’s necks. Earlier on Monday afternoon they had won the synchronised 10-metre platform amid great drama and emotion in Tokyo. A single teardrop slipped from Daley’s left eye. It stopped millimetres from the black Team GB mask covering his face. A little higher up, another solitary teardrop nestled just below the lower lid of his right eye. It was as if even his tears had paused to remember everything Daley had been through to reach this pinnacle of achievement.

Daley and Lee were on the podium as God Save the Queen echoed around a deserted arena. He is not an unpatriotic man but I am pretty sure Daley’s tears were the culmination of him remembering all the hope and disappointment, the despair and joy, he had endured these past 13 years. He had felt crushed at each of his three previous Olympics, in-between some happier moments when he won a bronze medal at London 2012 and then again in Rio 2016.

But Daley had also been subjected to more lasting grief when, six days after he turned 17, he lost his father to brain cancer in May 2011. He had also been through much private tumult before he came out as one of British sport’s very few openly gay men in 2013.

Transfixed by those two lonely little teardrops I kept thinking of one particular quote from the many times I had interviewed Daley. When we did his final interview before London 2012, just after he had told me knew it would be “scary” to dive in his home Olympics, Daley shook his head. “I’ll be amazed when, one day, I look back and see what I withstood between 13 and 18,” he said. “But my dream is to win Olympic gold.”