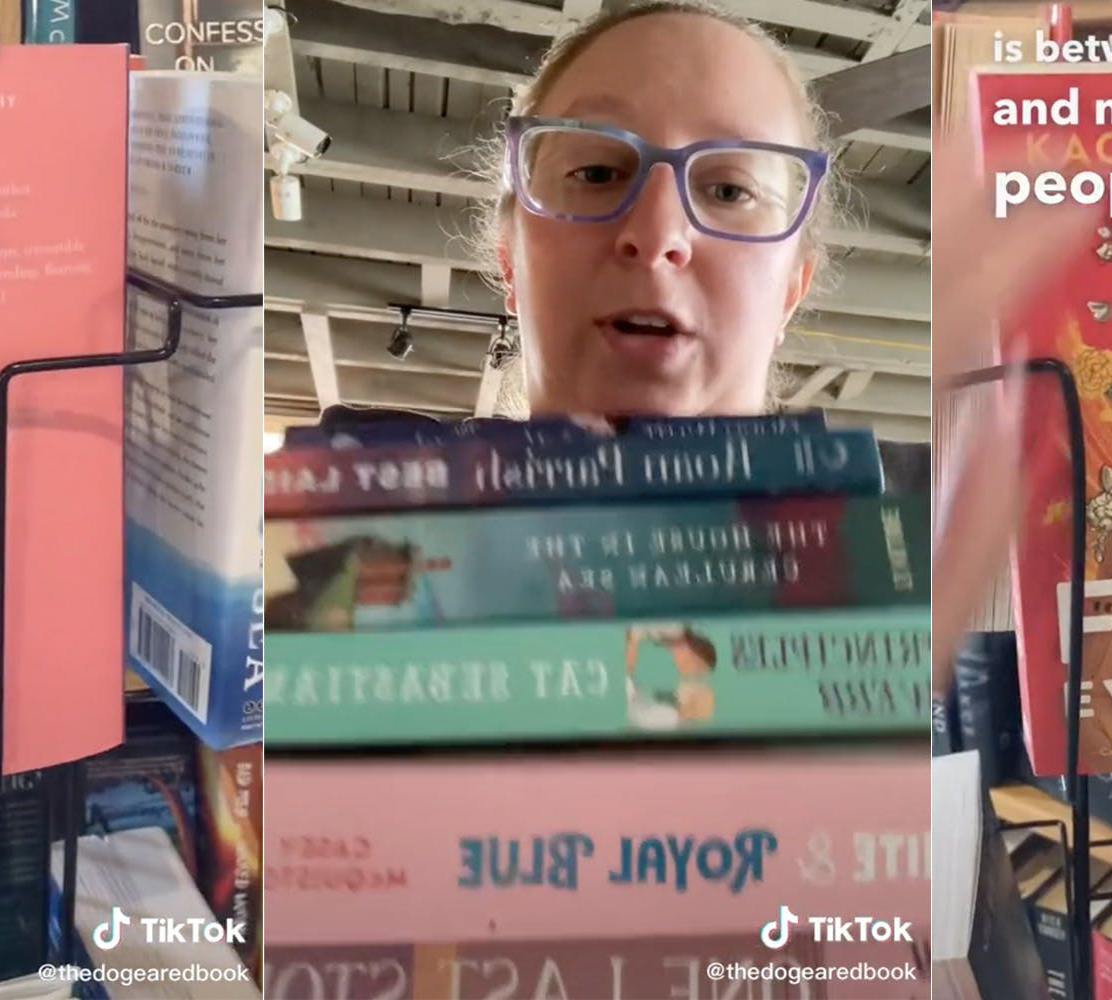 What’s a weird thing that happens a lot in bookstores? Carrie Deming, who has run independent shop The Dog Eared Book in Palmyra, New York, since 2015, had a surprising answer for her TikTok followers.

“People don’t always agree with all of the books we have on display,” she explains over a video of herself walking around her store and turning around some LGBTQ books that customers have flipped to hide their covers.

“So we have to run around whenever the store is in-between customers,” Deming continues, “and make sure that people haven’t taken books that they don’t agree with and turn them around so that the back is facing the front instead of the cover.”

Among the titles she showed were Cat Sebastian’s The Queer Principles of Kit Webb, a historical novel “about a reluctantly reformed highwayman and the aristocrat who threatens to steal his heart”; Julie Murphy’s Pumpkin, starring a fat, openly gay boy living in a small Texas town; Kacen Callender’s Felix Ever After, a young adult novel centered around a transgender teen; and Olivia Waite’s The Hellion’s Waltz, part of a series of historical novels that all feature lesbian romances.

“This doesn’t happen every day, but it happens shockingly often!” Deming wrote under her viral TikTok, which by Thursday had been liked by 1 million people and watched by over 4 million times. The video, published on July 16, spurred a series of similar stories in the comments.

“I work in a library and we recently had someone either hide or throw away all of our LGBT+ collection and it was incredibly upsetting to find out,” wrote user @libraryphantom. “My local bookshop has had an issue with people leaving church pamphlets in the books they don’t agree with lately,” user @thegreenathame added.

“I worked in a library for a long time and this happened regularly. We would eventually ban people for it because it goes against our inclusivity policies,” added @sugarandpeaches. Multiple commenters who identified themselves as Barnes & Noble employees commented about having to turn political books around regularly, too.

The tendency falls in line with calls for censorship of LGBTQ books in schools and libraries throughout the United States. A look through the American Library Association’s yearly “most challenged books” list, which is based on media stories and voluntary reports sent to the organization, shows that books containing LGBTQ themes and characters have been facing opposition for years, usually because they “conflict with religious viewpoints” or “threaten the traditional family structure.”

Alex Gino’s George, a children’s novel about a fourth-grade transgender girl who struggles to find her place in the world, has been the most challenged book in the country for the past three years, according to the association’s data.

On TikTok, though, it’s a different story. The ByteDance-owned social network is well-known for its vibrant queer community. The platform hosts a thriving community of bookworms, known as BookTok, whose most recommended titles—usually in the young adult and fantasy genres—often feature LGBTQ storylines.

It’s not incredibly surprising, then, that a multitude of TikTokers supported Deming after called out bigoted customers for turning the books around in her shop. In a matter of hours, her independent bookstore was flooded with orders for a very specific kind of book.

“Wow … I cannot believe how much it has resonated with everyone. The amount of orders that came in through our website last night for LGBTQ books is absolutely incredible,” the bookseller says in a follow-up video. “By the time I’m done I don’t think there’s gonna be a single BIPOC or LGBTQ book left in the store!”