Companies grapple with the meaning of being an LGBTQ+ ally. 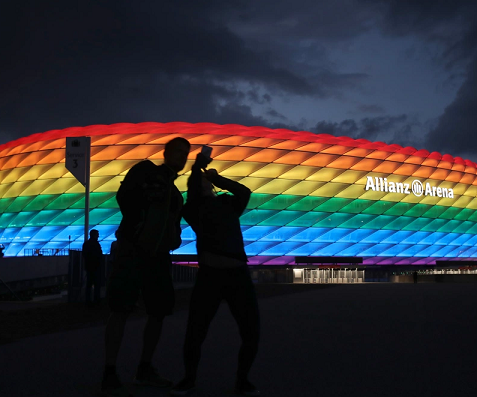 It didn’t take long for the make-or-break match in the UEFA European football championship tournament, pitting Germany against Hungary, to turn into an international incident. The bad blood isn’t over the soccer game but rather over what’s going on—or, more to the point, won’t go on—outside the stadium in Munich.

Munich city councillors barely disguised their motives. “On the occasion of the match between Germany and Hungary, the council wishes to send a visible message of solidarity to the LGBT community in Hungary, which is suffering under recent legislation passed by the Hungarian government,” it said in a statement.

The football governing body, UEFA, struck down the proposal, seeing it as a clear political message directed against Hungary’s hard-line leader Viktor Orbán and his government’s anti-LGBT agenda.

The UEFA quixotically tried to mollify both sides, suggesting Munich light the stadium in rainbow colors next week, or the week after—well after the Hungarian team bus has left town. European Union officials, including EU Equality Commissioner Helena Dalli, were not impressed. “Rainbows are not offensive. LGBTIQphobia is,” Dalli said.

Meanwhile, sponsors of the tournament, including Alipay, TikTok, Gazprom, Volkswagen, FedEx, Qatar Airways, Coca-Cola, and Booking.com, have not issued any public statements about the matter as of Wednesday afternoon.