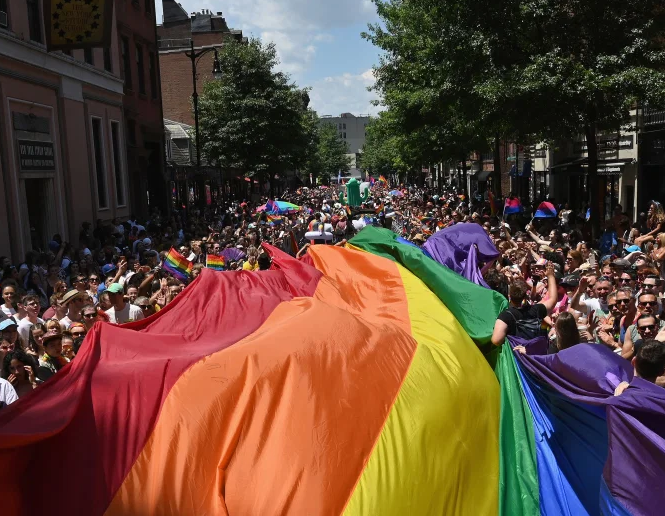 Recalling the first years of Pride celebrations in the early 1970s, photographer Stanley Stellar remembers how all the energy was concentrated in a small area of Christopher Street in New York City’s West Village. At the time, it was the rare neighborhood where gay people could go and meet in public, and Pride parades operated at a neighborhood-level size too — a far cry from the estimated five million people who attended last July’s World Pride event in New York City, the largest LGBTQ celebration in history.

“It started as a small social thing,” Stellar, now 75, recalls. “There were marchers too — very brave souls with signs, like Marsha P. Johnson, who inspired all of us. When people would taunt us, cars would drive by and spit at us, yell at us constantly, Marsha would be there, looking outrageous and glorious in her own aesthetic, and she would say ‘pay them no mind.’ That’s what the ‘P’ is for, is ‘pay them no mind, don’t let them stop us.’”

That unstoppable spirit is now marking its 50th anniversary: the first Pride parades took place in the U.S. in 1970, a year after the uprising at the Stonewall Inn that many consider to be the catalyst for the modern LGBTQ liberation movement. In a year when large gatherings are prevented by the coronavirus and many Pride events have been cancelled or postponed, over 500 Pride and LGBTQIA+ community organizations from 91 countries will participate in Global Pride on June 27. But, over the decades, Pride parades have evolved in a way that goes beyond the number of participants — and, having photographed five decades worth of them, Stellar has seen that evolution firsthand. “That was the epicenter of the gay world,” he says of the early years of Pride.

PrevPreviousCompanies grapple with the meaning of being an LGBTQ+ ally.
NextThe Generational Clash at Pride Is Actually a Sign of Progress.Next