The Assault on Liberty, Equality, and Fraternity 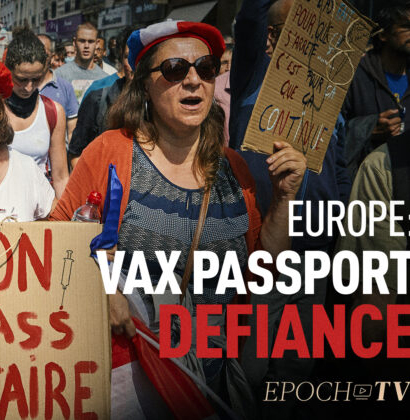 There’s a lot happening in the world today that is worrying for anyone who still holds the concepts of life, liberty, and the pursuit of happiness near and dear.

“Liberty vs. Vaccine Mandates in Europe; Public School Exodus; Race-Based School Discipline” deals with two of the biggest issues facing the United States today, namely the current threat of vaccine mandates and passports hanging over the populace and the many ways in which the public school system is failing students nationwide. This episode of The Nation Speaks offers the kind of in-depth reporting you aren’t going to find in the mainstream media (not even right-leaning networks) and is a must-see for anyone who wants a deeper dive into these issues than the three to five-minute interview limits of most televised news programs. It should also give the viewer reason to pause and consider what it really means to be a country where the people are free, equal, and united.

The first topic host Cindy Drukier addresses are the vaccine mandates and passport requirements currently spreading like wildfire across Europe, and it’s a fascinating, if frightening, look into what is happening to our allies across the pond. She speaks with Captain Alexandre Juving-Brunet, a French freedom activist; Sam Brokken, a Belgian former public health professor who lost his job for speaking his mind; and Alan Miller, founder of the UK’s #OpenForAll campaign. These three men break down the continuing authoritarian response to COVID-19 in their respective countries, how the public is reacting, and the common dangers all Westerners face in terms of censorship, polarization, ostracization, and trampling of privacy rights surrounding an individual’s vaccination status.

Juving-Brunet is the first interviewee, describing the marches for liberty and freedom happening across France in response to President Emmanuel Macron’s divisive speech in mid-July that made a clear separation between the vaccinated and unvaccinated. Juving-Brunet says the president’s declaration was nothing short of segregation that enraged the populace, which increasingly considers the government to be illegitimate and incapable of defending citizens’ constitutional rights. Thousands of citizens of all ages and political stripes took to the streets days after the speech to protest Macron’s attempts to use a person’s vaccination status as a wedge issue to separate the French into two camps.

Macron clearly underestimated his peoples’ commitment to their national motto—liberté, égalité, fraternité—thinking these concepts had gone out of vogue. It must have come as quite a shock to find that the citizens who elected him with the express understanding that he would keep their best interests at heart still care about liberty, equality, and fraternity. Juving-Brunet describes a “volatile” situation throughout France and sounds more than a little angry himself at his government’s attempts to divide and suppress its citizens while stripping away their freedoms. As well he should be.