Cheshire Police paint Pride rainbows on the side of squad cars. 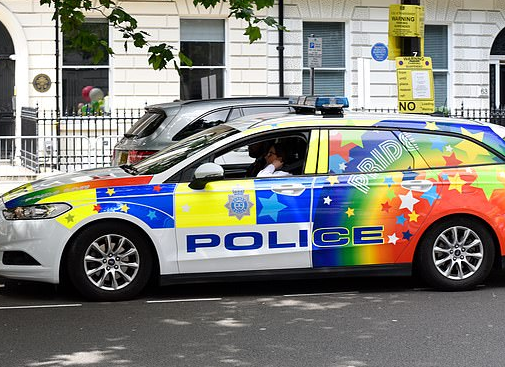 Police are painting rainbows on the side of their squad cars in a bid to beat online hate crimes and ‘give confidence’ to the LGBT+ community.

Critics have said forces should be focusing on ‘real’ issues such as knife crime and that the colourful cars might seem less intimidating to the public.

The cost of painting the cars, described as ‘hate crime cars’, is ‘quite minimal’ but are believed to give a ‘huge impact’ on the community.

Deputy chief constable Julie Cooke said: ‘Cars are there in the communities on normal policing patrol just to show the community that we want you to come forward… Critics have said forces should be focusing on ‘real’ issues such as knife crime and that the colourful cars might seem less intimidating to the public.

‘It is there to try and give confidence to our LGBT+ community, but also to other under-represented groups.’

It comes after reports of hate crimes have more than doubled in recent years, especially against transgender people.

It is unclear how many cars will be painted with the colourful insignia as it is down to individual forces.

Former police officer and founder of campaign group Fair Cop, Harry Miller, told the Telegraph: ‘We don’t see the Met with special cars for knife crime, even though the number of stabbings in London is appalling.