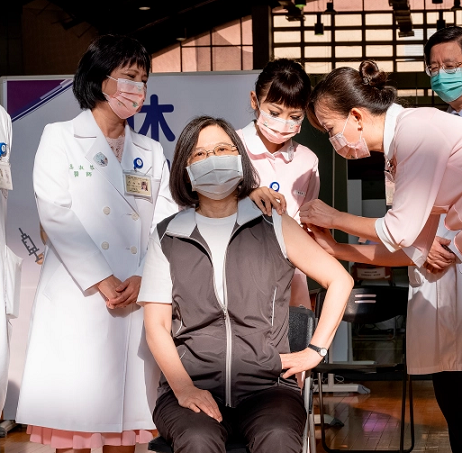 Taiwan has rolled out a domestically developed COVID-19 vaccine to the public, with President Tsai Ing-wen receiving her first dose at a Taipei hospital to demonstrate her confidence in the safety of the jab.

Made by Medigen Vaccine Biologics Corp., the vaccine was given emergency approval by regulators in July using a shortcut that prompted fierce opposition from parts of Taiwan’s medical and scientific community.

Tsai, who had held off on taking a vaccine from Moderna or AstraZeneca, the current mainstay of Taiwan’s vaccination programme, received her Medigen shot on Monday.

The president chatted to medical workers as they prepared her shot and answered a simple “No” to a question reporters called out asking if she was nervous. The whole process was broadcast live on her Facebook page.

More than 700,000 people have signed up so far to receive the Medigen vaccine, which requires a second shot 28 days after the first one.

Developed in collaboration with the National Institutes of Health in the US, the Medigen vaccine uses a piece of the coronavirus to teach the body to mount an immune response.

The Taiwanese government has ordered an initial five million doses and says nobody will be forced to get it.

PrevPreviousIndia records lowest tally of new cases in 160 days.
NextStream It Or Skip It: ‘Memories Of A Murderer: The Nilsen Tapes’.Next