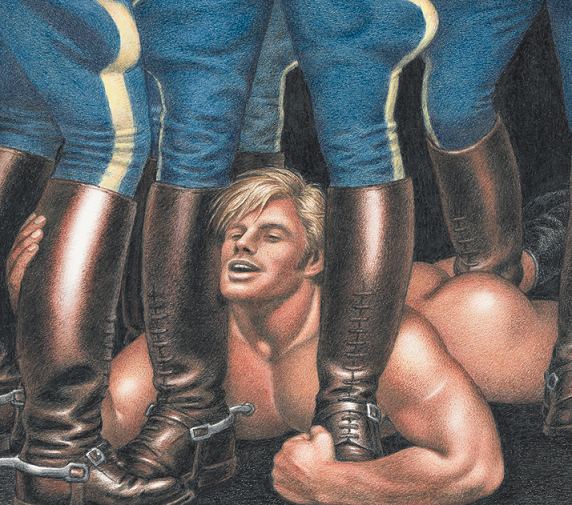 “Swann’s third annual auction of LGBTQ+ Art, Material Culture & History was an unmitigated success. From the limited exhibition, which had the highest attendance of any of the house’s exhibitions in 18 months, to the truly spirited and competitive bidding institutions and avid collectors all participated at what could at times be referred to as a fever pitch.

Records were set in many different categories: art, photography, posters and ephemera. Perhaps most heartening were the outstanding results achieved for artists whose work had not previously or only infrequently appeared at auction,” Swann Galleries President, Nicholas D. Lowry reflected on the Thursday, August 19 sale. The sale earned $1.1 million hammer ($1.3 million with BP), nearly 30% over the high estimate with 94% of the 268 lots on offer finding buyers.

Tom of Finland’s popular S&M illustrations led the auction, with the complete run of eight works on offer finding buyers, and recording a record-breaking price for the artist, proving that Swann has become the go-to house for the artist. Establishing a new auction record for the artist was Home – Secured, an exceptional 1982 colored-pencil work that pays clever homage to Canada with the breeches and boots of the Royal Canadian Mounted Police. The drawing earned $87,500, besting the previous record set by the house ($55,000 in 2020). Also of note was a 1965 pencil-on-paper work of Finland’s signature biker men ($35,000), and two preparatory sketches from 1982 ($18,750) and 1985 ($10,625).