12-year-old’s friends didn’t celebrate after he came out as gay. So a park full of strangers did. 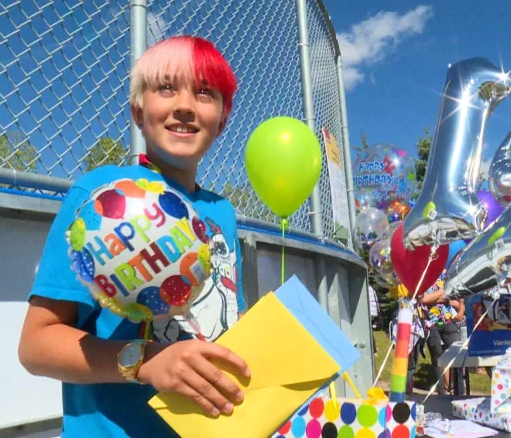 ‘It’s outrageously amazing that this little kid, even with all this adversity, can still be out here’.

A crowd full of strangers filled a northwest Calgary park to celebrate a boy’s rainbow-themed birthday during Pride Week.

Leah O’Donnell says when her son Brody Neville came out as gay this spring, the 12-year-old lost many of his friends.

That made the prospect of celebrating his birthday this year a sad one.

“I was asking him what he wanted to do for his birthday and he was in tears and said since he came out as gay he lost all his friends, so he didn’t even have people who could come,” O’Donnell said.

So, she put a call out to the community to show him love, posting about his situation on Facebook. And turn out they did.

Dozens of friends, family, strangers — and yes, some drag performers strutting to Born This Way — filled the park near Ranchlands Community Centre on Saturday.

When Neville arrived in the park, he initially thought it was an unusually large crowd waiting for the ice cream truck. When he realized he was the guest of honour, he wrapped his mom into a giant hug.

“Thank you everybody for this, this is the best day of my life,” a grinning Neville told the crowd.