Billy Porter on bringing queer realness to ‘Cinderella’: “Magic has no gender.” 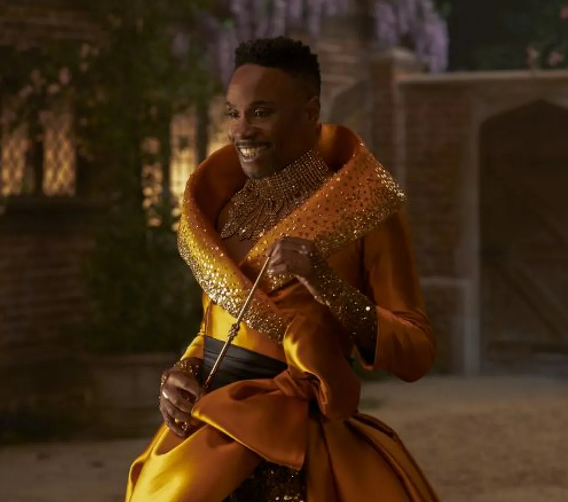 If anyone would ever deny Billy Porter has a magic about him…well, they’re flat out wrong. Porter, the Emmy-winning actor, activist, fashion icon, innovator and all-around badass, takes up the magic wand of the Fairy Godmother in the new film Cinderella, debuting on Amazon Prime Video September 3.

In other words, Billy is magical, and has the wand to prove it.

Porter, of course, rocketed to superstardom beginning with his Tony Award-winning turn in the Broadway musical version of Kinky Boots. He since went on to headline the groundbreaking series Pose as Pray Tell, the emcee of the New York Ballroom scene. The role–and his work in it–snagged Porter an Emmy in the process, making him the first openly gay, African-American actor to win the Best Actor in a Drama Series Emmy Award.

Cinderella casts Porter in the iconic role of the Fairy Godmother (also called the Fab G) in a reimagining of the classic fairytale. This new version utilizes contemporary pop songs to envision Cinderella as Ella (Camilla Cabello), an aspiring dressmaker living with her stern Stepmother (Idina Menzel). When the King and Queen of the kingdom (Pierce Brosnan and Minnie Driver) launch a search to marry off their slacker son Prince Robert (Nicholas Galitzine), Ella gets a bit of help from her Fab G, and must choose between a life as royalty, and a life of aspiration and independence.

We (Queerty) caught up with the always-enchanting Porter to talk about his genderfluid character, his career, and the shifting landscape of queer inclusion. Cinderella arrives on Amazon Prime Video September 3.

PrevPreviousCalifornia lawmaker’s Grindr profile blasted to his 17K Twitter followers.
NextTime to focus on what we are ‘for’.Next