They’re queer and they’re here: 185 German actors coming out together. 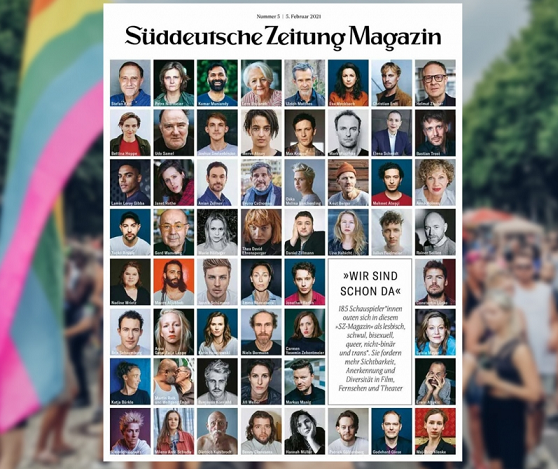 Even though queer people are an integral part of the performing arts all around the world, their careers are in danger when it comes to coming out and they are advised to stay in the closet to keep their roles.

We now embrace a new revolutionary move from 185 actors and actresses in Germany, who collectively came out as gay, lesbian, transgender, bisexual, queer, or nonbinary with their #actout Manifesto.

185 cultural workers came out in the SZ-Magazin to create a revolution. They want to fight against stereotyping, discrimination, and hiding. Even in today’s Germany, where being queer is widely tolerated, granted protection, and civil rights, certain groups still feel hesitant to come out for various reasons. As Markus Ulrich, the spokesman for the Lesbian and Gay Association in Germany (LSVD) reports, homosexual actors are often not trusted to play heterosexual roles authentically. The idea is that a heterosexual actor can pull up a queer character if he is feminine enough or she is butch enough, obeying anticipated stereotypical portrayals of LGBTQ+ people. But a queer person can only act in queer roles. Ulrike Folkers, known for her role in Tatort Ludwigshafen reports, “I was cast for a mother role, but when the director found out that I was a lesbian, she turned me down. That’s discrimination. Of course, I can play a mother.” She asks “How does it feel when you can’t show yourself off on the red carpet with the woman you love? What roles does a non-binary person dream of? And how does the television, film, and theater industry have to change?”.

PrevPreviousBi people have higher rates of depression and anxiety than gay or straight people.
NextCops promise to work with Brisbane Pride.Next