Bi people have higher rates of depression and anxiety than gay or straight people. 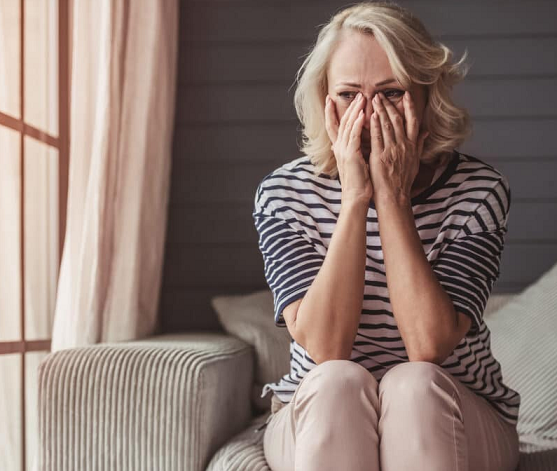 Bisexual people are more likely to experience depression and anxiety than their gay and straight counterparts – and biphobia has a lot to do with it.

Numerous studies over the years have found that bisexual people are more likely to experience mental ill-health than their straight and gay peers.

In 2015, a study found that bi women were 26 per cent more likely to experience depression than lesbians.

In another, from 2020, 58.5 per cent of bisexual respondents said they had a high or a very high level of psychological distress, compared to 11.7 per cent of the general population.

The study was conducted in Australia and was published in the Australian Journal of General Practice. In particular, it found that bisexual women are more likely to experience anxiety disorders than their straight counterparts.

It also reported that 77.6 per cent of bisexual respondents had considered suicide at some point in their life, compared to 13.3 per cent of the general population.

Crucially, the researchers behind the study asked bisexual people a big question: what were the reasons for their depression?

Many of the respondents reported having experienced biphobia, both internalised and from outside sources. Others drew attention to issues of bi-erasure, while some said they felt invisible as bisexual people.

The study noted: “Experiencing ‘feeling your sexuality is bad or wrong’ increases the odds of having higher psychological distress.

“These findings suggest that self-acceptance of one’s sexuality is an important aspect of mental wellbeing for bisexual people.”

Another interesting finding was that bisexual people in relationships with those of the opposite sex had worse mental health outcomes than those in mixed-sex relationships.

But that finding came with a caveat – bisexual people in opposite-sex relationships who were open about their sexuality with their partner were less likely to experience depression. The outlook was better again if they felt that their partner was supportive and understanding of their sexuality.

A 2018 review of existing research had a similar outcome. The review, which was published in The Journal of Sex Research, suggested three potential causes of depression in the bisexual community.

One of those was discrimination. Bisexual people’s experiences of stigma and discrimination were different to their gay and lesbian peers. In other words, biphobia is a real and very specific threat to the mental wellbeing of bi people.

The review also identified bi erasure and invisibility as a major issue. People who felt that their identities were being invalidated were more likely to experience depression and anxiety.