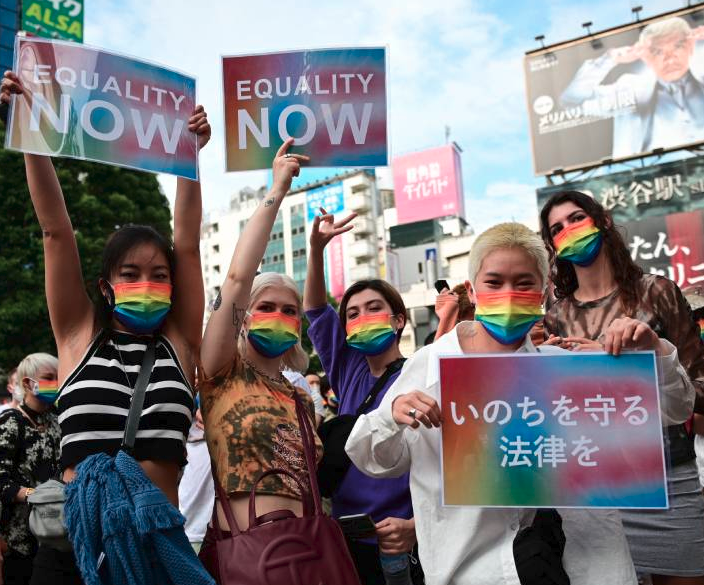 Japan is about to get a new prime minister – and two candidates in particular have the potential to transform LGBT+ rights, including same-sex marriage.

After the current Japanese prime minister Yoshihide Suga decided to step down a year into his term, his Liberal Democratic Party (LDP) is set to choose a successor on Wednesday (29 September).

The election is a “historic moment” for Japan – not just because two of the four candidates are women, but also because two candidates support same-sex marriage.

Alexander Dmitrenko is a co-founder and co-chair of Lawyers for LGBT & Allies Network (LLAN) and a counsel at Freshfields Bruckhaus Deringer in Tokyo. He told PinkNews that the current “frontrunners” for the election are Fumio Kishida, former foreign minister, and Taro Kono, the cabinet minister in charge of vaccinations.

Kono’s was the first voice from within the LDP in support of same-sex marriage, Dmitrenko explained, and a “fairly important” one at that.

Even before the leadership race, Kono made headlines in Japan after he said: “I will support marriage equality.”

“The LDP is not the most progressive of parties, but it has a very diverse membership,” Dmitrenko told PinkNews. “For Kono to come out during the leadership race and to express support for marriage equality is, to my mind, very leadership like.”

He said that Kono is a “very viable candidate” with “a lot of junior members of the party supporting him”, and that he is “very well-liked” within Japanese society.

Sanae Takaichi and Seiko Noda are the first women in over a decade to seek leadership of the LDP.

Noda has said that she supports same-sex marriage and in a recent campaign speech, she said that she wants to see more LGBT+ people “take centre stage” in society.

“I seek to create a society of diversity by having people who have not been given main roles in society, including children, women, the disabled and LGBTQ people, take centre stage,” Noda explained, according to ABC News.