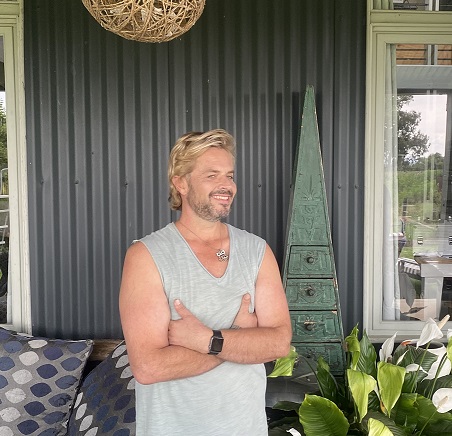 Trained as a landscape architect in the ‘90s, Donovan is the creator of Soul Oasis Urban Retreat, Mnandi, Centurion.

Trained as a landscape architect in the ‘90s, Donovan graduated with a BL Degree from Pretoria University in 1995.

When he met Leon in 1998, they decided to also team up in business, and in February 1999 began working together in the Fourways area – which at that stage was a developer’s dream, with Dainfern, Fourways Gardens and other estates were just being developed.

Over the next 25 years, Donovan and Leon would work on over 200 private gardens, as far afield as Kenya and Mozambique, and in a few cities throughout South Africa.

In 2010 they also opened a sister company to their landscaping business, to install artificial lawn – which was just becoming “a thing”. Their gut instinct was right and artificial lawn became more popular throughout the green industry. In 2018 they converted their business to a Belgotex Grass franchise, and cover the Johannesburg and Centurion area as their focal area.

In 2015 they moved to a 1Ha property in the suburb of Mnandi, Centurion. A blank canvas of veld grass awaited them on the property and of course it was not long before the creative juices started flowing – and they haven’t stopped since then!

The concept for Soul Oasis Urban Retreat came to life in 2016, and the next life purpose began, as Donovan realised that they were sitting on a little goldmine, if it was developed properly. In those days, an “urban retreat” was largely unheard of – but five years down the line, with a global pandemic happening in the meantime, suddenly the health connection between body, mind and soul has become evident. Pastimes such as meditation and mindfulness are becoming mainstream, and it is becoming just as important to recognise that your mental health is just as important as your physical health. Spaces such as Soul Oasis are going to become extremely important in years to come.

Experimenting with metaphysical elements in the landscape design of Soul Oasis, Donovan began using the term “Spiritscaping”, which he has since trademarked. It literally means landscaping with a spiritual basis. By bringing in metaphysical elements such as crystals, flow of chi, and other design elements, it is possible to manipulate a visitor’s mood and level of consciousness.

Based on The Map of Consciousness and by understanding that our outlook on life largely influences the experiences we attract to ourselves, and that each person is essentially experiencing each situation through their own “filters”, Donovan began understanding the importance of raising “your vibe”.

Whilst Soul Oasis is currently open to the public from Wednesday to Sunday, with a garden café serving light meals, in time to come there will be 20 overnight rooms as well as therapy rooms both for beauty treatments as well as mental health activities. Holiday destinations such as Soul Oasis will become important in decades to come, when travellers combine the benefits of activities to stimulate their lives, but also have downtown in quietness on an estate such as Soul Oasis.

Soul Oasis is launching their first retreat, called “Sowl Adventures” – combining the wisdom of the owl to guide you through a “treasure hunt” throughout the property. Over 40 activities will form the 12-hour retreat to teach the groups how raising their consciousness improves their life experiences.

PrevPreviousYour favorite calendar full of hot nude gingers is back.
NextGayish: A gay podcast about stereotypes.Next