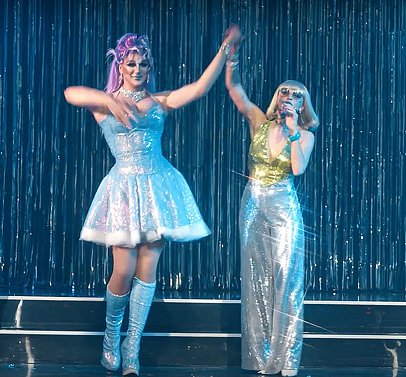 Nastya Ivleeva, a popular blogger with millions of followers on Instagram and YouTube, last week launched “Royal Cobras,” a drag competition that resembles the hit U.S. series “RuPaul’s Drag Race” while being separate from the franchise.

Activists say Ivleeva’s show glosses over the challenging reality in which Russia’s LGBT community lives by mimicking the American glamour of “RuPaul’s Drag Race” on a surface level without giving contestants the opportunity to discuss their experiences and struggles.

​​“For me, this show has nothing to do with the LGBT agenda in Russia, because nowhere in the ‘Royal Cobras’ was it said that this show was about LGBT people,” Nikita Andriyanov, activist and founder of the Russian LGBT history project Tetki, told The Moscow Times.

The Russian LGBT community has also accused Ivleeva of detracting from the political significance of drag culture by making herself, a heterosexual woman, the show’s main focus. As six drag queens perform in the show’s opening number, Ivleeva descends from the ceiling in a glittering outfit and takes center stage.

“The media says that Nastya Ivleeva has been working with drag artists for a long time. Nevertheless, I do not think that she should become the center of attention,” LGBT blogger Nikita Privet said in an interview with The Village.

The show’s judges, who were each invited by Ivleeva, are mainly other non-LGBT celebrities such as Alexander Gudkov and Ksenia Sobchak.

However, creating a show with LGBT performers in a country where socially conservative attitudes are widespread comes with its challenges.

Critics of Russia’s 2013 ban on “gay propaganda” say the law is used to silence LGBT voices, and last year’s consitutional amendements contain a clause defining marriage as a union between a man and a woman.

Complaints have already been filed with Russia’s communications watchdog and the Prosecutor General’s Office over possible “propaganda of nontraditional values” represented on the show.

The first episode of “Royal Cobras” opens with a disclaimer that the show “is not aimed at forming nontraditional sexual attitudes.”

“The main problem lies in the silence – hence the feeling that LGBT people have never existed and that all this is ‘just show business’,” he said.

The silver lining in Ivleeva’s show, he said, is that it can introduce drag into the Russian mainstream and potentially lead to greater LGBT awareness.

“The only thing this show can do for the community is that drag queens can get their moment of fame and possibly earn more followers on Instagram,” Andriyanov said.