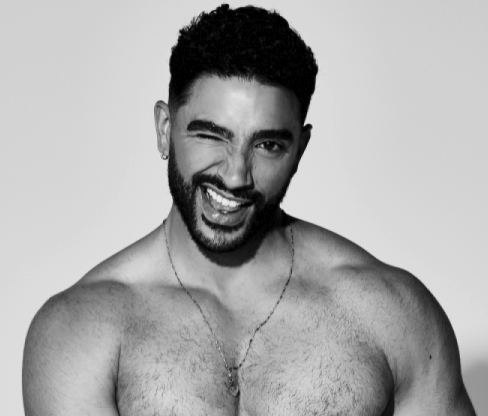 When Laith Ashley decided to post some sexy snaps on Instagram from a photoshoot he and a friend conducted in 2014, he had no idea it would lead him to make history on the runways of New York Fashion Week less than two years later.

Since then, the model, actor, singer-songwriter (“Like Me”), and activist has gone on to become the first transgender Pit Crew member on RuPaul’s Drag Race, to appear in British GQ and British Vogue, and to lead major fashion campaigns for Barneys and Diesel (one of the first trans models to do so). Now he’s heading to Hollywood.

Ashley is set to portray Ajax, a gorgeous small-town dancer with a heart of gold, in Desiree Staples’s upcoming indie comedy My Divorce Party. Although he’s already garnered the attention of casting directors after small parts in shows like Pose and Strut, this is Ashley’s first lead role in a feature film.

Because of his hypermasculine, “cis-assumed” appearance, Ashley says that landing cis roles is nothing new to him — and he has difficulty getting trans parts.

“The entertainment industry is trying to be more welcoming of trans people, but there’s still a lot of work to be done,” says Ashley. “There’s training that needs to be done around language; there’s training that needs to be done around trans people in general. I’ve read character breakdowns for TV and film that misgenders the individual… [and] sometimes, not all the time, it does feel like tokenism…. They’re not really trying to understand. They’re just like, Oh, they’re calling for diversity, so if we put a trans person in as this character we’ll get funded.”

Ashley also admits that just the audition process can be dehumanizing for trans folks.

Still, Ashley says he is grateful for the opportunities he’s had — and adds that the more trans people who end up on-screen and behind the scenes, the better it will be for all.

This story is part of The Advocate’s 2021 Film and TV issue, which is out on newsstands October 5, 2021. To get your own copy directly, support queer media and subscribe — or download yours for Amazon, Kindle, Nook, or Apple News.