“The Trolley Dollies – a Musical!” 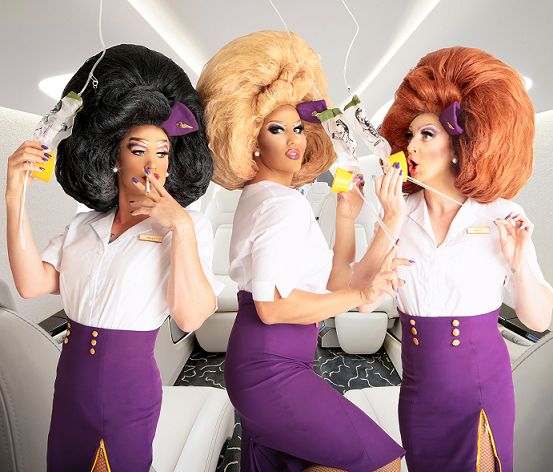 The Trolley Dollies, your favourite First Class Flight attendants, are finally touching down in Johannesburg!

The Trolley Dollies™, your favourite First Class Flight attendants, are finally touching down in Johannesburg! Gird your loins, however, because they’re not quite in their usual fine fettle; Cathy Specific and her sassy sidekicks, Holly and Molly have spent the last few months quarantined in their dressing room – purgatory for a drag, let’s be honest – and they’ve got a few things to say about it.

In “The Trolley Dollies – a Musical”, the girls take you behind the velvet curtain and into the proverbial dressing room with them, where they exchange the heels and wigs for trials and tribulations. It’s a backstage pass like no other, so hold onto your hats!

For the last five years, this one-of-a-kind drag troupe has been the resident act at Gate69, South Africa’s Premier Cabaret Dinner Theatre still flourishing in the heart of the Mother City. However, the time has come for these three Aviation Goddesses to spread their wings and fly the coop. It’s time for the world to see what these three bitches have been working on for all these years.

The Trolley Dollies™ were last seen on stage in Joburg 10 years ago when they burst onto the entertainment scene in 2011 with a 6-month season in EL MILAGRO with the dinner cirque spectacular, MADAME ZINGARA.

They have been a firm favourite on the corporate circuit and are also the recipients of a Broadway World South Africa Award.

Men want them and women want to be them!